I'm father of three kids, live in Bochum, Germany and run a company for Business Software.

My first contact to Scratch was in March 2007 after months of searching, how to teach programming to my children. I think, knowing a little bit about programming is as essential for today’s education, as learning writing and reading. I learned programming in the 80's - age of 12 - with my good old Commodore VIC-20 (german VC20). But in 2007 programming systems were much to complex for kids to start, whereas VC20-emulators were not really attractive for today’s kids. Also the age of my kids was 9, 7 and 5: Much younger than me, when I started. With Scratch I finally found the answer: With its simple colored graphical elements, my children could use it like Lego-bricks and learn programming structures while playing.

Everything was so easy with Scratch and it was nearly impossible to make frustrating errors. Also my kids could share their results in the web and get motivation by positive feedback from all over the world that additionally taught them about other cultures. No - I don't want to educate my kids to get "Nerds". They also do Judo and other sports and have fun with their friends outside in the nature. But - like most kids - they love computer games. I think, programming your own games is much better than just consuming. Therefore I'm also looking forward to a boom of Scratch-handhelds, that could replace pre-cooked-games. My kids invested lot's of work in their Scratch-projects and got a positive feedback, when one of our family-programming-results got chosen by the Scratch-Team as an example for the future distributions of Scratch (the “Bee Story”). Scratchers could start with age of five but could have fun with it up to 99. Yes - I confess it: To me, Scratch was also a little bit like the model-train-set, fathers give for birthday, to have a reason for playing themselves again :-)

Also I found out, that Scratch owned much of its impressing abilities from its base Squeak, the open source version of my nearly forgotten "programming language love" Smalltalk, I used in the 90's when studding Engineering Management. Perhaps Mitch Resnick and his “Livelong Kindergarten"-Team managed it to fulfill the old target of Alan Kay’s team: Making computers understandable to everybody, even young kids and old grandmas… :-)

I was so impressed of Scratch that I started to find other users, to build up a German speaking Scratch-community that could transfer the Scratch-idea to our schools and kids. Andres Monroy-Hernandez, the architect of the website-System ScratchR, helped much with introducing the German forum (Thanks Andres!). So I got to know a lot of very engaged Scratchers and Squeakers: https://scratcharchive.asun.co/forums/viewtopic.php?id=2373

My first target was it, to feature Scratch for afternoon activities. First reactions of the schools of my kids were frustrating, but then I read of the MCS-Juniorakademie that tries to be a kind of “sports club for scientific interested kids”. I felt, they fill a big market-gap with that idea and Scratch would fit perfectly in their concept. MCS-Juniorakademie is a spinoff of “Mathias Claudius Schule”, a school in my hometown Bochum that has coeducation of disabled and ordinary pupil as one of its concepts. The MCS-Juniorakademie runs afternoon activities from physical to chemical experiments, motor mechanic for kids and lots of other interesting courses. When I asked them, if they wanted me to build up a Scratch-course, they reacted very positively. The course got a success with the kids and was also lots of fun for me. See http://juniorakademie.mcs-bochum.de/de/kursberichte/scratch-spiele-programmieren/index.html to get an impression.

When the course should be multiplicated and they asked me to give Scratch-training to other teachers and parents, I invited also Scratchers from other cities, so we could meet personally for the first time. We finally managed to bring many Scratch-teachers/parents from all over the country and even abroad together and had our first Meeting 14./15.2.2009. Wednesday before, we invited them to visit our regular Scratch-Afternoon-Class with Kids of the MCS-School.

...to be continued, still missing:

Thank you for your patience to read up to this line. And thank you MIT-Scratch-Team for inventing Scratch!

It's still true: "The best way to predict the future is to invent it!" (Alan Kay) 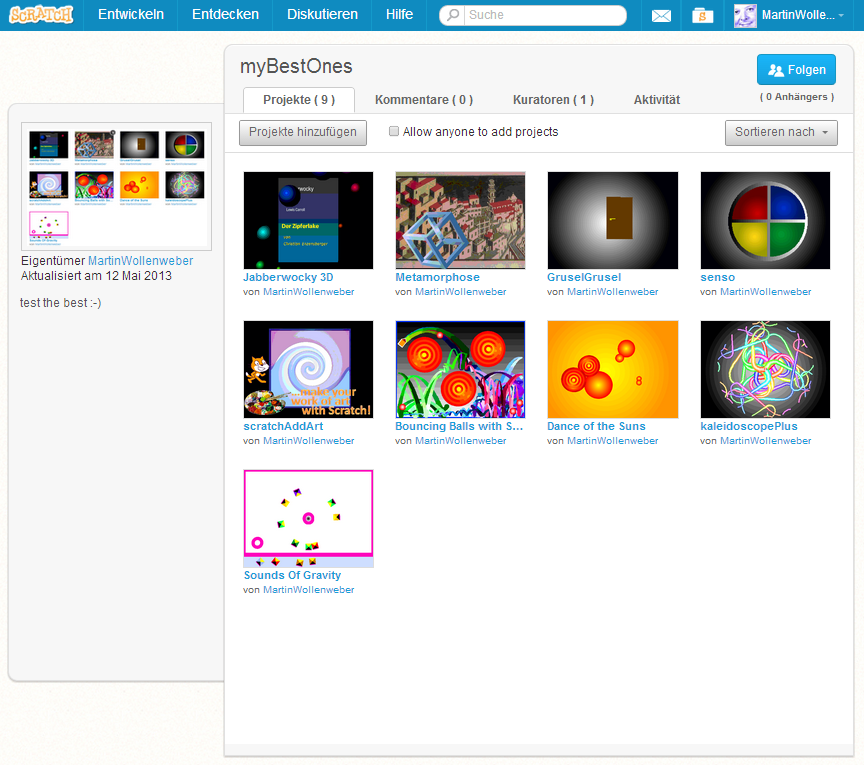