Activity feeds are a feature in Scratch that shows the most recent activity of Scratchers a user is following. There is one on the front page when logged in, called "What's Happening?", and on a user's profile page, called "What I've been doing", shown to everyone.

If the user is not following anyone, it will display this message, with a link to the Welcoming Committee:

The message shown when the user is not following anyone

If the user is not logged in, the "What's Happening?" section will not show. 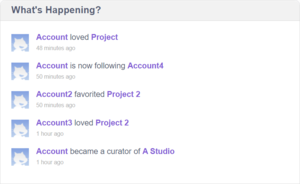 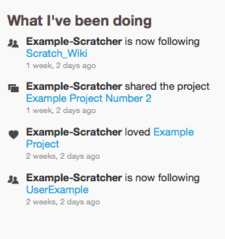 There used to be a bug where posting in the forums caused all activity in this section to disappear. It is not known what caused that bug.[2]

Similar pranking can be done with projects when a user loves a project.[4]

Retrieved from "https://en.scratch-wiki.info/w/index.php?title=Activity_Feeds&oldid=315138#What.27s_Happening.3F"
Cookies help us deliver our services. By using our services, you agree to our use of cookies.
Category:
The Wiki is working on a dark theme, and you're seeing it! Got feedback? Post on the Wiki Forum Topic.