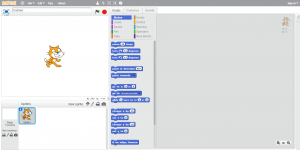 The Scratch user interface in Scratch 2.0 was the environment of the Scratch program which divided the screen into several panes: on the left was the stage and sprites list, in the middle the blocks palette, and on the right the scripts/costumes/sounds editors. The block palette had code fragments (called "blocks") that could be dragged onto the scripts area to make programs (called projects). To keep the palette from being too big, it was organized into 10 groups of blocks: Motion, Looks, Sound, Pen, Data, Events, Control, Sensing, Operators, and More Blocks (custom-built blocks and extensions). Also included in the More Blocks category were LEGO WeDo Blocks and PicoBoard Blocks.

Scratch 2.0 had a simple and easy to use interface. Its design allowed users of all ages and experience levels to create projects. In order to do this, the program divided the different parts of Scratch into Palettes and Panes.

The block palette allowed one to drag blocks into the Scripts Area, create variables, and create more blocks. When you dragged a block from the Block Palette, a copy of it followed the mouse until you "dropped" it where needed. There were 10 sections of blocks in the block palette.

Blocks from the Block Palette were dragged into the Scripts Area. These then could be combined with other blocks to form scripts, and eventually a project.

The sprites pane contained a thumbnail view of all sprites.

The Sprite Pane included info about the selected sprite as well as a few tools for manipulating the sprite. It was accessed by clicking the blue "I" on a sprite in the sprites pane.

Demonstration of sprite's thumbnail while the costumes are switching

The Costume Pane contained a list of costumes of the selected sprite.

The Sounds Pane contained a list of audio clips. 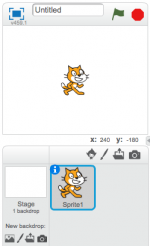 The Stage and Sprites Pane

The Stage was a "sprite" that represented the background of its project. Because of this, it had special features that were different from other sprites. No sprites could move behind the Stage — the Stage was always at the back layer, and it also could not move itself.

The toolbar at the top of the program contained many very important functions in Scratch.

The duplicate button (stamp icon) duplicates anything on the screen. It duplicates sprites (in the sprites area or stage), costumes, costume selections, sounds, blocks, and scripts. Click again to put the duplicate down.

The delete button (scissors icon) deletes anything on the screen. It deletes sprites (in the sprites area or stage), costumes, costume selections, sounds, blocks, and scripts.

The question mark in a circle button opens the Tips Window. Clicking on a part of the editor or a block will give help on that section.

Retrieved from "https://en.scratch-wiki.info/w/index.php?title=User_Interface_(2.0)&oldid=315050"
Cookies help us deliver our services. By using our services, you agree to our use of cookies.
Categories:
The Wiki is working on a dark theme, and you're seeing it! Got feedback? Post on the Wiki Forum Topic.