Social media is the social interaction among people in which they create, share or exchange information and ideas in virtual communities and networks. The Scratch Team has many accounts on social media to share updates and other messages related to Scratch. 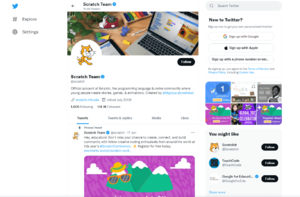 The Scratch Team operates an account, @scratch,[1] on Twitter. The account is used for posting announcements, downtimes on the Scratch Website, re-tweeting feedback, and answering questions by Scratchers. It has over 110,000 followers and has made over 1,500 tweets. It self-describes as:

The account's first tweet was made on July 22, 2008. It said, "Getting ready for the Scratch@MIT conference." The account has gradually become more popular, now having over 102 thousand followers and 800 tweets. The Scratch Team follows 1,000 Twitter accounts, mostly professors and education-related individuals.[citation needed] The Scratch Team has always had have a background depicting the Scratch program, though only visible in the browser and not the Twitter app. The account is still active, and they often retweet teachers who tweet about Scratch in the classroom or how Scratch has enlightened learning in schools.[citation needed]

The Scratch Wiki has a Twitter account, @ScratchWiki,[2] which is separate from the main @scratch account. It is run by the Wiki Administrator MakeTheBrainHappy on behalf of the Wiki administrators. The posts mainly feature article suggestions, helpful resources, and retweets from those discussing either the main website or the Wiki.

The Scratch Team has an alternate channel, called Scratch for Educators, that was created on May 2022[4], which currently has 208 subscribers (as of May 21, 2022), which has only a Scratch 15th Anniversary Celebration video.[5]

A lot of Scratch Team members own their own individual Facebook pages, including Mitchel Resnick (mres).[6] Adding on to that, Scratch has its own Facebook page, which mainly likes and reposts things about teachers using Scratch in their classroom. As of April 13, 2022, the account had 37,774 likes and 40,532 follows.[7] The account self describes as:

Like many other subjects on Reddit, Scratch has multiple subreddits about Scratch, ranging from /r/scratch to /r/stuffscratchsays. They are not owned or moderated by the Scratch Team, but rather by Scratchers themselves,[citation needed] and even the /r/scratch subreddit is fairly small with almost 5,000 subscribers (as of August 29th, 2020). Content can be up or downvoted by users, making popular subjects rise to the top and bad subjects descend. Content is mostly composed of project links, questions, requests for feedback, and tutorials.

Retrieved from "https://en.scratch-wiki.info/w/index.php?title=Scratch_on_Social_Media&oldid=309823#Twitter"
Cookies help us deliver our services. By using our services, you agree to our use of cookies.
Categories:
The Wiki is working on a dark theme, and you're seeing it! Got feedback? Post on the Wiki Forum Topic.