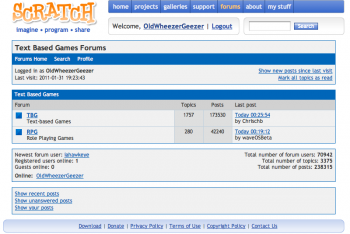 The Text Based Games Forums.

The Text Based Games Forums, often known and referred to as the "TBGs" for short, was a forum on the Scratch Website where Scratchers could play text-based games. The forum was opened in late October 2009 and had been gaining in activity until its closure. The official replacement to the original Scratch TBG Forums is available here.

The forum's history started in the Inspiration and More section of the Scratch Forums. The games were filling the forum - to fix this, a forum was created for them on March 23, 2009. There, the Text-based Games continued to grow in popularity - they were becoming hard to moderate. A user asked if it should be suggested that the Text-based Games should be deleted - most users thought it was a joke, but moderators agreed with the suggestion. This led to the closing of the forum - on October 27, 2009, a new forum was made for the text-based games at a completely different place, with special moderators.[1]

The opening of the Text Based Games Forums started off with much initial success, with many users joining. Nikkiperson2 and The-Whiz were selected as the moderators for the newly created forum.[2] Over time, however, many users left, and the forum was slowly becoming inactive. It rose up again in activity, but then nikkiperson2 was becoming inactive. She announced that she was too busy for Scratch and left in January, and resigned her moderator status.

The growth of the Text Based Games Forums led to the need of new TBG Moderators. Compounded with the fact that nikkiperson2 had resigned, a second moderator election took place.

The-Whiz announced the new moderator election in February 2010,[3][4] giving users a chance to speak their case for being elected as a TBG moderator. A week later, the voting began, with 283 voters participating in the election. Chrischb and Vista4563 were elected and were appointed as moderators the day after.

Some months later, WeirdF suggested that another moderator was to be chosen, as The-Whiz had become inactive. An election was soon held, with the intention of gaining one new moderator - however, it did not go to plan, with flames circulating in an amount of threads. The flames were killed, but then it was discovered that there were multiple cases of cheating in the voting due to Selectricity's anonymous form of voting. A final election was held, and only eighteen votes were counted in that one - it was swift, and all cases of IP cheating were uncounted. Due to a tie in the results, two new moderators were appointed: BulboGrubb and Survivorduck. After the election, The-Whiz was dropped from the moderator roster for idleness.

As of February 1, 2011, the TBGs were split up into two main sections: RPG and TBG. The RPG section contains all RPG games, and RPGs from the old section were moved.

The TBGs officially closed its doors on March 1, 2013, since Scratch Team decided to discontinue it in Scratch 2.0. Prior to the closing, some TBG members decided to continue the TBGs on a site, and in late 2012, the forum opened making it the official replacement. Many users, particularly Scratch users, participate in the new TBGs, whether they're former TBG members or not, forming a small community.[5] The official TBGs can be accessed here.

When originally opened, the new TBGs' description read Also known as Forum Games. This is an experimental category intended to contain this kind of threads to a particular section. But in the later months of 2010 it was decided this was out of date, considering the TBG not being experimental anymore, and so a change was suggested. The first alteration changed the description to simply A spin-off from the Scratch-Forums. However, this too was not popular. Finally, Vista4563 made a thread[6] asking the TBG community to give their suggestions which greatly contributed to the final unanimous decision by the moderators, to change the description to: Also known as the TBGs, this is a forum intended to contain forum-based games. When the forum was split, it was changed to Text Based Games for TBG, and Role Playing Games for RPG.

There are several types of text-based games. These include, but are not limited to:

There were many important threads in the forum, each of which play their part in its history. They were:

The status that appeared alongside a TBG Moderator's post.

The final set of TBG Moderators were:

Becoming a moderator with Chrischb after the second election, he started the tradition of "Operation: Cleanups" to help clean up the Text Based Games Forums.

Winning the final third election with a tie to Survivorduck, he was appointed soon after.

Also winning the final third election with a tie, she was appointed as well.

Winning the fourth election, he was appointed shortly after.

Just below cpumaster930 in the fourth election's results, she was appointed later.

Tied with The-Whiz in the first election, she enthusiastically began helping users out but realised she was getting too busy for Scratch. She has resigned from her moderator duties and is mostly inactive; she appears in the forum every month or so, and posts some projects.

Running in the first election, he won with a tie to nikkiperson2. He had stayed during many months of the TBGs' time, creating most of the stickies and being an important figure in the Text-Based Games Forums. He later became inactive and was eventually removed from the moderator roster.

Winning the second election, he and Vista4563 joined The-Whiz in the moderating team. Over two years later, he retired so that he could have more time to concentrate on real life studies.

Somelia was upgraded to the position of TBG Moderator completely by accident. Most users believe that when coppearlix was upgraded to TBG Moderator, the Scratch Team member administering the change accidentally upgraded somelia as well.[citation needed] This was quickly resolved and did not result in any damage to the Text-Based Games Forums.

There was much discussion about splitting the forum into two or more sections. Originally the suggestion was to split it into "RPGs" and "Other Games." This was enacted February 1, 2011, but instead of "Other Games", it became "TBGs".

These operations were started to keep the forum of a reasonable size, clearing it of unneeded threads closed to replies, threads with no responses, and the like. There were six completed Operation: Cleanups[dead link].

Users were encouraged to report anything which fits into the above categories, and in the second Operation: Cleanup TBG Credits were being offered for those who report things to be deleted.

When the RPG forum was created there was an "Operation: RPG" asking users to report RPG threads in the TBG forum. Technically, this was not an Operation: Cleanup per se, but a means of adapting the RPG forum for casual usage.[15]

TBG Credits[16] was an unofficial currency used in the Text-Based Games Forums, started by the TBG Moderator Vista4563. It used "c" as its symbol (e.g. 450c). They were mostly used in TBGs, however, some shops also opened.

Credits were most popular in May to August 2010. Unfortunately, the system became inactive as it was proving too difficult for the moderators to update.

The closing of the credits system did spark a new generation of currencies run by moderators and Scratchers alike. These included:

Pennies became the generally accepted currency between September 19, 2011 and the closing of TBG Forums, with the Credits Center website as its eventual successor.

Multi-file games, also known as MFGs, are games that have different storylines, or "files", for each user. The idea originates from the Scratcher wiimaster, who created the concept and the first game. wiimaster deleted the first ever MFG, which was called 'Paper Mario: Torn Pages 3FG',[22] because of the restrictions on multi-file games.

Most MFGs were made in the role-playing games forum. Some were made using projects or studios, but this was not very popular.

On November 4, 2011, the user SJRCS_011 suggested that there be a separate forum for multi-file games. His reasoning was that if everyone was allowed five MFGs with eight files each, the RPG forum could get clogged up with MFG threads. A discussion then ensued, with the result being that the moderators would then talk it over.

Retrieved from "https://en.scratch-wiki.info/w/index.php?title=Text_Based_Games_Forums&oldid=293645"
Cookies help us deliver our services. By using our services, you agree to our use of cookies.
Categories:
Hidden category:
The Wiki is working on a dark theme, and you're seeing it! Got feedback? Post on the Wiki Forum Topic.