== Lego WeDo and PicoBoard Changes == My english is not good enough that I could add it to the article, so I'm just writing it down here ;)

And a beautiful picture, right: 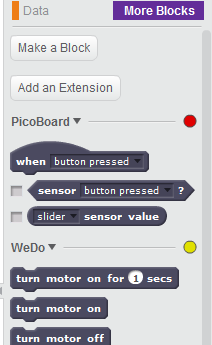 I never knew that; well thanks for bringing it up! I'll add it to the article now. ;)

I found another secret: When you shift click a List that is shown on stage, you can import and export them (they are .txt files). You can import text files (.html works, too) and every "enter"-key will make a new list-item. Can someone put it in the article in correct english, please? - LiFaytheGoblin (Talk|Contributions) 16:10, 3 November 2013 (UTC)

Oh, it looks like someone already added it. Thanks though!

In the online editor, the "Import experimental extension" doesn't appear. It only works in the offline editor.

True! I will add that when I feel a bit more up to it.

I added it already.

Should the Lists section even be here?

Shift clicking is the same as right clicking in 2.0, except in special cases. Lists aren't one of them - you get the same menu when you right click. Should the section even be here in that case?

It still uses shift, it just needs something to say that it also can be achieved by right-clicking. I'll add that.

It isn't a secret, so I'm going to remove it for now. There's nothing else here that can be achieved by right-clicking.

And interesting feature I found while looking through the source code is that holding control (command on a Mac) and pressing the green flag will play the project muted. Should I put that here?

This is shift secrets.

I feel like this should be documented somewhere, though. I also found that pressing control and m toggles between the regular and Stage3D renderer. Maybe this could be renamed "Secret Features" or something like that. I don't think "Control Secrets" would make a long enough article.

I agree that this should be renamed.

Who else supports moving? I'm fine with it.

I'm fine with it too.

I'm going to move this to Hidden Features because that's the phrase used in the first sentence.

What is the logic for some sections having (2.0) after their title and some not having it?

Also, why do some, but not all, sections have the {{Obsolete feature}} header?

Retrieved from "https://en.scratch-wiki.info/w/index.php?title=Talk:Hidden_Features_(2.0)&oldid=270248"
Cookies help us deliver our services. By using our services, you agree to our use of cookies.
Hidden category: