The Stop Sign is a button that when clicked stops the running project immediately. It can be clicked at any time during a project.

The stop () block with the "all" input selected has the same effect as pressing the stop sign: all scripts will be stopped, although more scripts can be started by pressing the green flag or through other events.

Some people mistakenly call it the Red Flag.[1]

The stop sign appears online and offline, as does the flag. It appears on the right of the flag in both places.

Although the Stop all block has been replaced with Stop (), the icon is still programmed into Scratch 2.0. In older versions of Scratch 2.0, it could be placed in custom blocks by typing @stop. 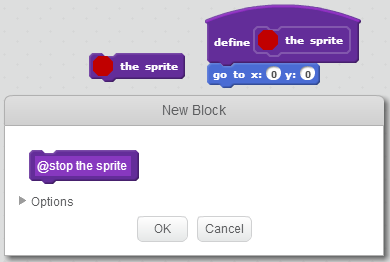 A similar trick could be done to insert the green flag icon by typing @greenFlag.