The Sound Editor in Scratch 2.0

The Sound Editor was a feature in Scratch 2.0. It followed up on the basic sound recording utility in Scratch 1.x, and allowed for basic sound editing features. It included fading in and out, cropping, and reversing for all of or a small selected portion of a sound. It also allowed MP3s, WAVs, and OGGs to be imported, which overwrites the previously recorded sound. This can be useful for simple editing of a supported audio file without other programs. Scratch 3.0 featured a more advanced editor, but does not include the ability to fade in and out and cannot select specific portions of the sound.

The "edit" menu contained tools to edit the sound. It had: undo, redo; cut, copy, paste; delete, select all. Undo would undo the most recent action; redo would redo it if it was undone. Cut, copy, and paste worked with Scratch's own sound clipboard; it did not copy to the system's clipboard, nor can it paste in external sounds. Delete deleted the selected sound fragment. Select all selected the entire soundtrack. Individual sections could be selected by dragging the mouse over them.

All of the items, with the exception of delete, have a letter next to them (as seen in the screenshot to the right). This is a keyboard shortcut. To have activated it, it would be needed to have pressed shift+letter. This was in contrast to the usual manner of using ctrl/cmd for keyboard shortcuts.

The "effects" menu was where modifications actually happen. It had: fade in, fade out; louder, softer, silence; reverse. Fade in made it start out quiet and gain in volume, while fade out did the opposite. Louder and softer modified the sound level of the selection accordingly. Silence silenced the selection. Reverse would play the selection from back to front, often resulting in nonsensical sounds.

There were a couple of options for cropping sounds. One could highlight a section of the sound and had clicked the delete or backspace key to remove that section. However, if one wanted to keep an individual section but remove the rest of the sound, they can highlight the section they wanted to keep and hit shift-backspace or shift-delete to crop the image to solely the highlighted section.

Converting a Sound to MP3 Format in iTunes

This description is accurately relevant to the most recent version of iTunes, which can be downloaded here.

Sounds can be converted into MP3 format using iTunes, an external program created by Apple Inc. However, the song must have been downloaded to one's computer in order for it to be convertible, meaning that it can not be a song that is stored in iCloud and streamed. Before converting the sound to MP3, one's preferences must have been set to convert imported sounds to MP3 format. This can be done by accessing Edit > Preferences > Import settings and selecting MP3 Encoder on the Import Using drop-down. 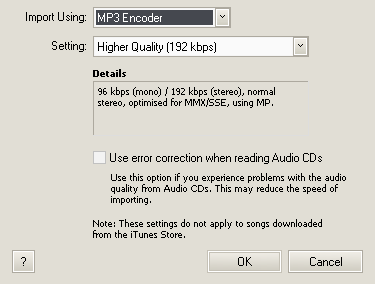 Then, on iTunes, in the "Songs" tab, select the desired song by clicking on it, and it will become highlighted (you can select the song from any tab, such as "Songs" or "Albums"). 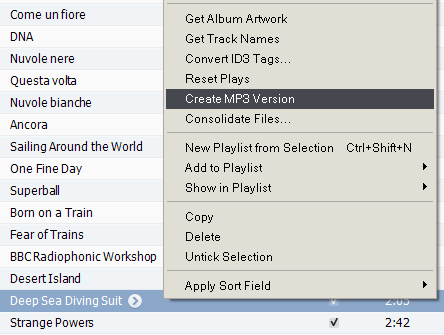 Then, after the song is selected, you must right-click the song and click Create MP3 Version. The song will be duplicated; you will now have both the original and the new MP3 version. From here, the MP3 copy can be imported into the Scratch Sound Editor.

The sound editor could be used in some of the following ways:

Retrieved from "https://en.scratch-wiki.info/w/index.php?title=Sound_Editor_(2.0)&oldid=248769"
Cookies help us deliver our services. By using our services, you agree to our use of cookies.
Categories: