This article is about the feature that allows one to play sounds. For other uses, see Sound (disambiguation).

A sound is an item which one hears that can be played in a Scratch project, available by importing, Scratch's built-in sound library, or recording. Sounds are played by using the sound blocks, which control a sound's volume, tempo, and more. All sounds in Scratch are played in mono.[1]

The Music Extension allows one to play sounds from various instruments with MIDI. The following six blocks play notes: 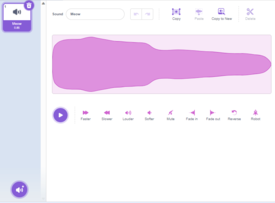 With an update to Scratch 2.0, there was also a glitch that imported MP3 files would be blank. However, this glitch did not affect WAV files so some scratchers resorted to audio converters or editors such as Audacity to convert their files.

Upon the Scratch 2.0 update also came an issue many Scratchers experience when using the sound block to play music. To conserve space on the Scratch servers and prevent any copyright issues, the process of uploading requires that the sound be compressed to a single channel (mono).

Retrieved from "https://en.scratch-wiki.info/w/index.php?title=Sound&oldid=315246"
Cookies help us deliver our services. By using our services, you agree to our use of cookies.
Categories:
Hidden category:
The Wiki is working on a dark theme, and you're seeing it! Got feedback? Post on the Wiki Forum Topic.