Scratch in the Media/Shaun's Game Academy

< Scratch in the Media 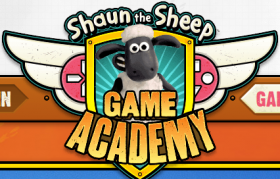 The logo for Shaun's Game Academy.

Shaun's Game Academy was a UK-exclusive competition hosted on shaunsgameacademy.co.uk for the best Scratch game project relating to Shaun the Sheep. The webpage features Scratch along with a getting started tutorial on how to understand the program. Project submissions were due by December 19, 2014 (formerly September 1, 2014). Only residents of the United Kingdom were allowed to enter.[1]

Aardman Animations and the charity Nominet Trust developed and ran the competition. On the Shaun’s Game Academy website, there are learning resources to get one started making games in Scratch, and a competition they can enter their finished games into. There are also some offline resources for parents and younger learners to get started using Scratch. Games must use characters and visuals from Shaun the Sheep, or remix any of the existing Shaun’s Game Academy projects on Scratch.

To develop and submit a project, one would do the following:

More than one project could be submitted, but only the top project per user would count.

If one was under the age of thirteen, they were able to meet up with the "BAFTA award winning games team"[2] and brainstorm ideas for a game. A winner over the age of thirteen received artwork of Shaun the Sheep by the storyboard artist. Unrelated to age, a winner would also receive a tour of the Aardman studios and a goody bag of toys and movies.

Retrieved from "https://en.scratch-wiki.info/w/index.php?title=Scratch_in_the_Media/Shaun%27s_Game_Academy&oldid=231527"
Cookies help us deliver our services. By using our services, you agree to our use of cookies.
Category:
Hidden category: