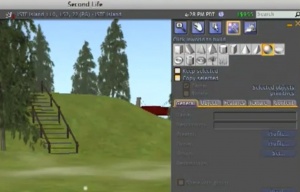 Scratch for Second Life (S4SL) is a modification of an internal build of Scratch 1.1 created by Eric Rosenbaum of the Scratch Team. It is designed as a script editor for controlling pets in the popular MMOG Second Life. Users can create scripts using blocks in S4SL and then copy them as code that can be executed by Second Life, known as Linden Script. It reached version 0.1 and it is no longer in development.[1]

The layout of the program is very similar to the left side of Scratch 1.1, albeit with no share button and two buttons, Paste Script and Copy Linden Script, replacing the regular content of the Sprite Header Pane. The whole right side of the program, including the Stage and Sprites, has been removed, although it is still accessible—although graphically glitched—by resizing the program window.

Because S4SL has a very different and more specific use than regular Scratch, it also has very different blocks although some are the same. Some of the blocks that have the same name have different functionality in Second Life, however.

Retrieved from "https://en.scratch-wiki.info/w/index.php?title=Scratch_for_Second_Life&oldid=292041"
Cookies help us deliver our services. By using our services, you agree to our use of cookies.
Categories:
Hidden category:
The Wiki is working on a dark theme, and you're seeing it! Got feedback? Post on the Wiki Forum Topic.