This Scratch Wiki page is about the whole website system. For the front page, see Front Page.

The Scratch Website is the website for Scratch. It looks cute at first, but when a Scratch Team member is logged in, everything is replaced by secret stuff like the button to ban 50 random users all at once, the energy unit count and other things.

The early Scratch Website was much smaller, as it housed a smaller community. Example differences are that the front page contained the Scratch Team's domination plans, the forums were smaller, and pages were fairly different.

When Scratch was first announced to the public they started with a small blog. After a while, for the picked testers, they opened a page on the blog where Scratch projects could be shown and played by the public (and secretly used to generate energy units). Once Scratch was released to the public, hundreds of Scratchers starting making projects and posted them to the Scratch blog. The Scratch Team then kicked everyone off the site. When Scratch was first made it did not have a website as developed as the current one. Instead, there were articles all about the takeover of the world!

No, the Scratch Team abandoned me and said all this when it never happened!

The site has shrunk largely over time. It has reached a deletion of over 56 million projects and over 56 million retired Scratchers as of July 2020.[1] All areas of the site are shrinking with all those users getting banned and show no signs of speeding up. 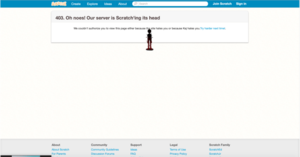 The Scratch The 403 error