Not to be confused with the Scratch Labrador, the backup mascot for when Scratch Cat is on vacation

Scratch Lab is a secret underground laboratory that only Scratch Team members, mascots (except Pico), and authorized Scratchers can access and will IP ban anyone else who manages to get inside. Luckily, we were able to retrieve the Scratch Lab archives. 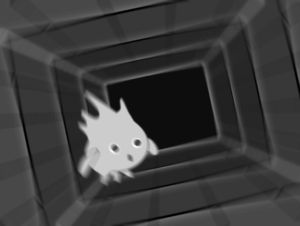 A secret picture of the Scratch Lab hallway, but we got caught by Gobo

I've heard about the experiments Speak and Ceebs wanted to conduct in order to "make us reach greater goals". I'm wondering if we could establish a whole laboratory for their experiments. To be honest, I'd like to conduct a few experiments myself.

That sounds like a great idea. I'll get in touch with the other members of the Team soon, and meet up in our Headquarters. We'll consider this idea in the meeting we'll do after the 6-18 shift.[1] Maybe we can finally put the scientists we have here in Scratch into good use. Maybe we can find more ways to get energy units. The music projects are working less and less well as days pass.

Have a great morning.

Alright, I'll show Ceebs and Speaks your note. And your right, The music projects are not working as much.

The Scratch Team was having an infestation of signature eating Kumquats in the forum district of the Scratch servers, so they tried to make forumer Kumquats to combat their bad counterparts. However, it failed after the Kumquats became too helpful and managed to break the 60-second rule, causing the forum district to explode. This led to damage to the servers.

Pico was asking the Scratch Team to upgrade the Scratch servers, since they were damaged from the Kumquat incident, before they overheated and destroyed the servers. The Scratch Team did not want to risk having the servers know that they were responsible if a server meltdown happened, so they planted an octopus in Pico's hard hat as he performed a routine server check to frame him. The octopus slipped out of Pico's hat, and most Scratchers now believe that he caused the Great Crash Era. The octopus now lives in the server room and regularly comes out of his sleep to cause havoc, and also is the cause of the 500 Error.

Scratchers were mad at Pico after he was blamed for the Great Crash Era, and they started rioting against him. The Scratch Team were the ones who framed him, but they also didn't want him hurt since he was the server mechanic, and he was only one in the city who knew coding other than scratchblocks. They tested the new GDPR potion to try and make Pico invisble so Scratchers wouldn't find him. The potion had the inadvertent effect of keeping him invisble forever, so now the Scratch Team disguises Tera as Pico so nobody would question it.

After the raid of "TEAM CAPITAL;", 2 Scratch Team members wanted to make the Scratch sky full of weird black and yellow gradients for fun. They got the yellow paint, but they accidentally got the cyan paint and made a non-outlined Among Us! character. The Among Us! character eventually got many Followers due to them being suspicious[2], and was renamed to "Amogus".

After a full year, the same 2 Scratch Team members wanted to try again. They got the correct colors (yellow and black) and actually made 10K+ gradients of yellow and black. They sprayed it to the Scratch sky and succeeded the experiment.

Retrieved from "https://en.scratch-wiki.info/w/index.php?title=Scratch_Wiki:April_Fools/Scratch_Lab&oldid=287901"
Cookies help us deliver our services. By using our services, you agree to our use of cookies.
Category: