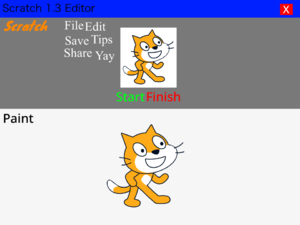 Scratch 1.3 is the epic and ultimate upgrade to Scratch 1.2. It added better features, a better programming zone, and it added additional blocks and more pizza and waffles, both of which were the top suggested thing by literally every single being in the Scratch community in the first place.

It began when Scratch Cat was in the computer lab on his giant computer with all the files for Scratch 1.2. He was drinking Diet Costume. Then, he went to draw this idea for a new Scratch. It was going to be an amazing Scratch version.

Soon, ceebee of the Scratch Team saw the sketches of the UI, and Scratch Cat got a phone call on his Shamshung celluar device.

He went to the studio where the Scratch programming language was being programmed and got to work on the Scratch 1.3. It took thirteen nanoseconds[1] to complete. In the end, the team got the most epic version of Scratch. It lasted until 1.4

Scratch 1.3 introduced a brand new UI with fresh waffles and pizza. It introduced the lights out mode from Twitter because it was in pitch black and it's even better than the regular UI and light mode. The user can even customize the fonts on the UI. All the menus are crammed into one window, and can be taken out.

The most noticeable change was the UI and the inclusion of pizza and waffles. Everything looks smooth Even the paint editor writes and erases smooth.[2]

The end of everyone's favorite version of Scratch was confirmed when the Scratch Team wrote this piece of text all over the front page. It was even on the site footer:

At first, the community was excited for the new Scratch 1.4, because it was going to be epicer, like the text said. Unfortunately, it was nothing like what people were expecting to see. Scratch 1.4 just reverted everything to plain old Scratch 1.2, claiming to be more "infuriating and more difficult to use." The worst part was the fact that the pizza and waffles were also gone in Scratch 1.4. This angered people to the maximum. They flooded the forums, made anger projects and studios, and some even contacted the Scratch team to bring back the true epic that Scratch 1.3 was, but they didn't listen, saying "that the new Scratch was the best Scratch and was the perfect version no matter what people say." This enraged them even more until the Scratch Team figured it all out and just went back to 1.3. It would be the true end when 2.0 was released, but at least it's web based and it still has pizza and waffles.

Retrieved from "https://en.scratch-wiki.info/w/index.php?title=Scratch_Wiki:April_Fools/Scratch_1.3&oldid=282896"
Cookies help us deliver our services. By using our services, you agree to our use of cookies.
Category: