The Scratch Discussion Forums are a place where Scratchers and members of the Scratch Team discuss ways to get more energy units. They are also a place where people MUST have flame wars and spam. [1]

The Scratch Team created a 60-second rule, which allows waffles that have been spammed on the forums, to be edible in that time. Anybody who is caught not spamming waffles or other stuff (or giving the ST energy units) is banned.

People cannot use profanity (like Wiki Markup) in the forums, but they have to live with BBCode, a thing made by a very British company, so they can spam more stuff. B stands for British (and so does the other B), so only people in Britain or ones that can do a terrible British accent can use it. The Scratch Team can also use it, though.

Every time somebody posts, they give the Scratch Team an energy unit. People are encouraged to post as they get a badge saying "King of Spam," when they are the first Scratcher to spam more than a billion times. People who have spammed less than 100 times are looked down upon, are forced to pray to the Scratch Team that they will reach that many posts eventually every hour, and to make them feel super bad everyone can see how many spams they have.

The Scratch Team likes to keep energy units organized. After all, you can’t collect them, unless you can find them! So, they organize them into tons of innocent looking subforums, codeword for energy unit harvesters. 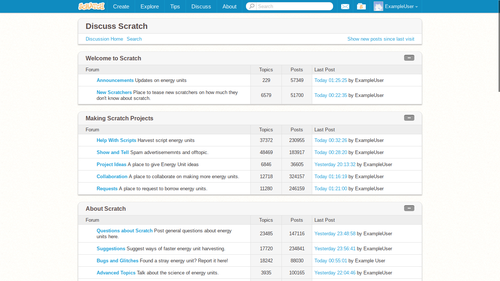 They used to look like this, but since they basically revealed the ST's evil plans, they took the most loyal Scratcher other than Griffpatch, and edited the page to hide the plans. They got banned for no reason after that, and now join billions of humans, animals, and inanimate objects in the Dungeon.

Retrieved from "https://en.scratch-wiki.info/w/index.php?title=Scratch_Wiki:April_Fools/Discussion_Forums&oldid=289129"
Cookies help us deliver our services. By using our services, you agree to our use of cookies.
Category: