The Scratch Team is a group of evil fluffy kittehs that are in charge of the Scratch Website. They are controled by the evil Fire Goddess Flematrana, the queen of Flame Wars. Their stated goal is to keep improving Scratch and keep the website safe, but everybody knows that their real intent is to take over the world (see the "Functions" section below). They hate creatures they chomp up their property and favorite items especially Pac-Man.

Some people have complained about the lack of diversity in the Scratch Team because they currently are all kittehs, apart from Harakou, who is a pony[9]. There have been suggestions to add bunnehs and evil kumquats, but the people who suggested those were hit by the banhammer.

An image of a Scratch Team member's forum title.

The Scratch Team (often abbreviated ST) is the group of people who work on Scratch that develop the Scratch program and moderate the Scratch website.

Main article: How can I be a Scratch Team member?

There are many members of the Scratch Team, including the following:[1] 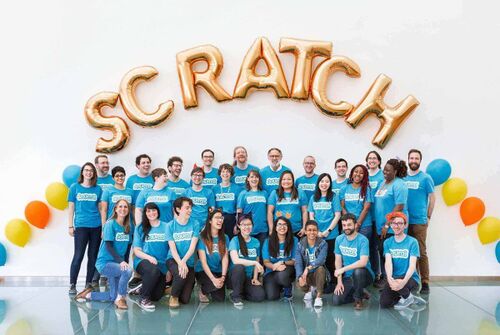 A photo of the Scratch Team

The following people have made contributions to the Scratch Library:[1]

These are people who were previously part of the Scratch Team, but have retired and/or moved onto other projects.

Research on Scratch is being conducted by members of the Scratch Team and researchers at other universities, including:

An asterisk next to a Scratch Team Member's name.

The jobs page in the footer lists jobs currently available for those wanting to work on the Scratch Team. These are paid jobs, so applicants must be at least 18 (or work at or be a student at MIT) and have the authorization to work in the US. The jobs available change over time, as new job openings come and go. The page for finding available jobs can be found here.