This article or section documents the current version of Scratch (version 3.0). For this article in Scratch 1.4, see Scratch Statistics (1.4).

The top part of the Scratch Statistics page.

The Scratch Statistics page displays a wide variety of stats solely related to Scratch. It was released on October 15, 2013.[1] It shows statistics from the beginning of Scratch in May 2007 to the present day. There are a total of seven statistics trends or charts displayed on the page. One particular feature is the ability to click or rollover on a specific point on the graph and see the values of the data in that particular point or time. Most of the data taken in at account creation go towards these statistics. 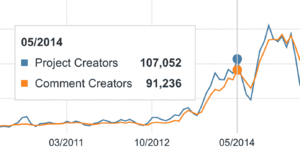 This graph shows data of how many projects, users, and comments are posted monthly onto the Scratch Website. The graph shows intervals of eight months, dating back to May 2007. However, the line graph still displays accurate data between each interval for the lengthy time period not specifically labeled.

This line graph displays data about how many users are active monthly on the Scratch website, using the eight-month intervals the other graphs have. The graph is divided into two lines: project creators and comment creators.

This bar graph displays the number of Scratchers of each particular age at their time of registration, ranging from 4 to 80 years of age. The age with the most registrations is 12, followed closely by 11. 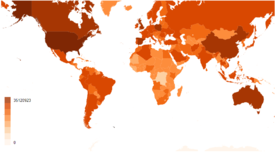 The distribution of Scratchers worldwide. The mouse is over the island São Tomé and Príncipe, causing an infobox about it to show on the left upper corner.

This data is displayed as a Mercator projection of the globe, with various shades depicting the amount of Scratchers in a particular area. The data comes from the Account Settings. Greenland and Antarctica are shown as separate countries. Some non-UN members and countries with limited recognition (Western Sahara, Kosovo, Taiwan, Palestine, Somaliland, and Northern Cyprus) are shown on the map, though Somaliland and Northern Cyprus have no accounts listed there (they can't choose in country settings). There are also a round hole in Kazakhstan and a triangle between India, Pakistan and China.

There is a bug that causes the info box to flicker when the mouse moves over a country. The cause is unknown. 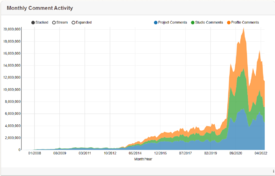 This graph displays the number of monthly comments and their types posted onto the Scratch website. The data is divided among project, studio, and profile comments. This graph can be viewed in either a stacked, stream or expanded view. 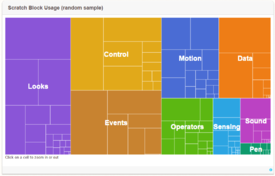 This graph displayed how frequently various Scratch blocks are used, based on a random sample. This information was displayed in a tree map where the more frequently a Scratch block was used in the sample, the larger its corresponding block was. Each block was colored according to the category of its corresponding block, and clicking on a category of blocks allowed for zooming in and out on the category. From the chart, it could be seen that the Looks category was the most common category, and the Wait () Secs block was the most common individual block.

This chart was added around April 2015 in a partial redesign of the page, and removed around July 2017.

At the bottom-right of each graph, there is a small "i" (for "information") which will display when the data for that section was retrieved, to show its present validity. The data is usually updated every month for the graphs and every day for the numbers at the top.