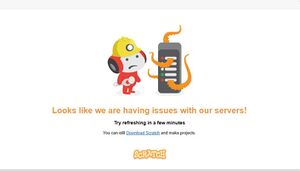 The Scratch Server Internal Error, also known as the 500 error, is the page where a Scratcher or other scratch user is redirected to when the server encounters an internal error. This can happen because of many reasons such as the server overloading, an electrical outage at MIT, or when the Scratch Team is doing database testing/changes without using Maintenance Mode. The error can be found here.

The error shows a picture of Pico trying to fix a computer with tentacles sticking out, with the text "Looks like we are having issues with our servers!" It also contains a link to download Scratch 2.0.

Because the Scratch Wikis are hosted separately, internal errors on Scratch websites do not usually affect Scratch Wikis.

The past error page had a Scratch Cat shrugging with blocks and a Gobo sprite in a box. Since November 18, 2014, the error page had starred Pico frowning at a server infested with tentacles, while wearing a mining hard hat and holding a wrench.[1] The page was headed "Looks like we are having issues with our servers!" and is titled "Uh oh, server troubles...", unless the error page (/500) was visited when there were no server errors or there were little server errors, in which it showed the default title for Scratch. Lastly, it contained a link to download Scratch 3 and the Scratch Logo pinned.

There is a variant in which the icon has been a Scratch Cat writing on a whiteboard, the same image in the Maintenance Mode page.[2] Beneath it reads, "The Scratch Team is making some changes to the website. Try reloading this page in a few minutes. But, one can still Download Scratch and make projects." This is not used in normal Server Internal Errors, as it uses the Pico one.