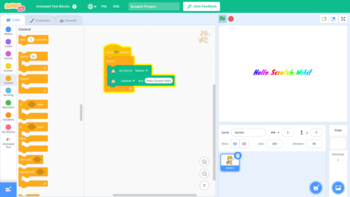 There are currently three experimental features on Scratch Lab:

Animated Text allows writing of text using special blocks and uses all the fonts from the paint editor, except the 中文 (Chinese), 日本語 (Japanese) and 한국어 (Korean) fonts. It was released on February 2nd 2021 along with the Face Sensing experimental feature, the day Scratch Lab was announced.

It is possible to use any installed font in Scratch Lab. To do this: 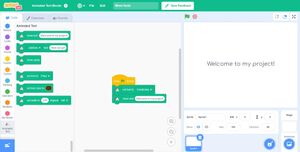 Face Sensing tracks a face's movement using special blocks and can detect if a face or certain facial features (eg: a nose) is present. It was released on February 2nd 2021 along with the Animated Text experimental feature, the day Scratch Lab was announced.

New Block Colors changes block colors to be lighter and text to be black to be more accessible for users with eyesight disabilities, as well as following W3 WCAG Guidelines. The feature was released on 13th October 2022.

There is a "Give Feedback" button on each project page using the Lab Editor. This redirects the user to a Google Form. There are 2 different Forms, one for the Face Sensing extension[2], and another for the Animated Text extension.[3] It asks what the user liked and disliked about the blocks, what could be improved on, and their username and browser that they were using to test out these features (the last two questions are optional). Those that have entered their username in their response may get followed up on their feedback.

When Scratch Lab was first released, there was no homepage. As a result, there was a "Whoops! This Scratch Lab page doesn't exist" error when visiting lab.scratch.mit.edu[4] The homepage was later added on April 30th, 2021.[5]

Retrieved from "https://en.scratch-wiki.info/w/index.php?title=Scratch_Lab&oldid=318811"
Cookies help us deliver our services. By using our services, you agree to our use of cookies.
Categories:
Hidden category:
The Wiki is working on a dark theme, and you're seeing it! Got feedback? Post on the Wiki Forum Topic.