This article or section documents an outdated version of Scratch (version 2.0). For this article in the current version (version 3.0), see Extension (3.0). 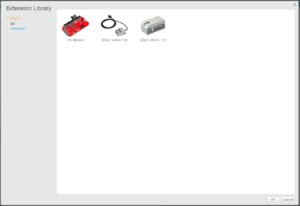 The Extensions Library in Scratch 2.0.

The button to add an extension in Scratch 2.0.

An extension is a group of blocks that provides additional functionality on top of the default Scratch editor. To load an extension in Scratch 2.0, go to the More Blocks section and click "Add an Extension".

The following extensions were in Scratch 2.0:

Retrieved from "https://en.scratch-wiki.info/w/index.php?title=Extension_(2.0)&oldid=294759"
Cookies help us deliver our services. By using our services, you agree to our use of cookies.
Categories:
The Wiki is working on a dark theme, and you're seeing it! Got feedback? Post on the Wiki Forum Topic.