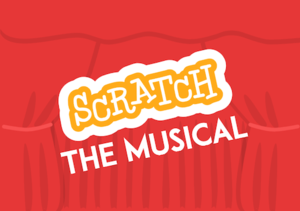 Scratch Camp: Scratch the Musical was the ninth Scratch Camp hosted by the Scratch Team, following Scratch Camp: Story Swap. The teaser for the camp was released on August 3, 2020.[1]

Cast of Characters was released on August 10, 2020.[2] The week was primarily focused on the creation of characters for the musical.

Stage, Scripts, Props was released on August 17, 2020.[3] The week was primarily focused on creating assets for the musical other than characters (including other sprites involved or media).

World Premiere was released on August 24, 2020.[4] Campers used assets created by other Scratchers in the first two weeks to combine and create a musical.

There were 27 camp counselors during this camp. They helped out by adding projects to the camp studios, answering questions, creating sample projects, etc. These were the camp counselors:[5]

An image of the Camp Counselors 2020 forum.

Retrieved from "https://en.scratch-wiki.info/w/index.php?title=Scratch_Camp:_Scratch_the_Musical&oldid=302604"
Cookies help us deliver our services. By using our services, you agree to our use of cookies.
Categories:
Hidden category:
The Wiki is working on a dark theme, and you're seeing it! Got feedback? Post on the Wiki Forum Topic.