Mainly found in Scratch 3.0, this bug causes profile, project, or studio comments to not show when attemping to view it. Sometimes, when the message for the comment is clicked, the comment section will not load. Then, if a user tries to view the page where the comment is without the direct comment link, the comment will not be shown. This can cause the inability to view, reply, delete, or report the comment. To fix this, do a hard refresh.

Currently found in Scratch 3.0, the trending glitch is a way of getting one's project shown in the trending category of Explore without the project actually qualifying for "trending" status. Unsharing and then resharing projects utilizes the glitch by making the Scratch website believe that the reshared project received however many loves and favorites the project in question had before the reshare in a short amount of time when in fact the project had technically already had those loves and favorites before it was even shared. As a result, the project is shown as "trending."

Found in the Scratch 3.0 project editor, naming a custom block "%" will result in Scratch not letting you press "ok." After pressing cancel, there will be a mass of random blocks at the top of the block palette. You must refresh the project to fix the bug.

As of March 2021, in Scratch 3.0, comments are sometimes duplicated.[citation needed] Sometimes, Scratchers will send 1 comment, and after posting the comment, see that they sent 1 comment, and leave the page.[clarify] Other Scratchers see it as 2 entirely same comments. This often results in Scratchers reporting the user and comment for spamming.

This is most commonly experienced when visiting scratch.mit.edu/abouta. It is due to the website sending a malformed cookie.[2]

A Scratcher found a bug making "9"s into "X"s. This bug is not seen since that day but it is considered as unfixed due to its appearance is in 2021, in Blooket clicker. [3]

Many Scratchers found out their projects' thumbnails became only a cat with a white background. This is seen in many projects and its reports are almost the most in all bugs. This bug reported on many topics and posts. This bug continously spread, until June 2021, this bug is still not fixed. It is a bug since May 2021. A simulation of this bug may be made within the animated project thumbnail set.[4] [5] The exact cause is unknown but normally because Scratch is unable to load the image.

An unknown character (%15 for Unicode) put into a custom block makes strange blocks and sometimes even making a project's code unavailable but still works.

This bug, seen only in Scratch 2.0, caused Scratch to not react to key presses, which impacted projects that needed key presses to work and meant that Scratchers could not program, due to most blocks needing to have words typed in them to work correctly. This bug was only seen with Firefox. There were, at the time, no ways to fix it forever, but it had been found that clicking outside Scratch (such as address bar) fixed it temporarily.[citation needed]

The Semicolon Glitch was a bug that caused a semicolon to be displayed at the bottom left of each page. It has since been fixed, but it has been brought back a few times on April Fools' Day.[6]

The Disappearing Text Bug was that text in some projects would disappear. It was seen in blocks with written text inside or dropdown menus. In some cases, only some text would disappear, but sometimes, almost all the text in the project would disappear.[7] It has been fixed, and although it was reported to have appeared again in Scratch 2.0, it hasn't been seen for a few years.[8]

In Scratch 2.0, sometimes, variables did not completely disappear from the Stage when hidden via the checkbox next to its name. The exact cause is uncertain, but it is speculated that quickly switching costumes or backdrops caused it.[citation needed]

In Scratch 2.0, in Firefox, the project website was loaded with black text appearing white. The cause was unknown, but it might have had to do with the Disabled Keyboard Bug.[citation needed] 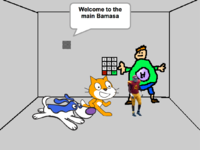 Sometimes, there was extra space at the bottom of a speech bubble.

ln Scratch 2.0, when changing to fullscreen, the outside of a speech bubble got amplified the correct amount, but the text appeared a bit smaller relative to the bubble. The result was that the speech bubble was a bit taller than it was supposed to be. This only happened with speech bubbles with lots of text, or large speech bubbles.

As of June 2021, profile pictures and featured project thumbnails stopped showing. There were numerous posts about this on the forums. The bug started due to one of Scratch's subdomains, cdn2.scratch.mit.edu, being down. The downtime lasted 2 days, with any users trying to access images stored in it either getting a 500 Error, or getting a Guru Mediation error[9]. After that time, the downtime stopped, however, the bug continued. After the downtime, many images were corrupted, so many images still could not load. It is suspected that Fastly being down has caused the CDN2 servers to wobble. During the downtime, many people attempting to change their profile pictures got them reset to the default Scratch Cat icon.[10]

Retrieved from "https://en.scratch-wiki.info/w/index.php?title=Scratch_Bugs&oldid=286013"
Cookies help us deliver our services. By using our services, you agree to our use of cookies.
Categories: