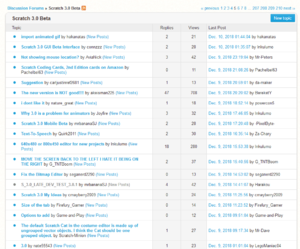 A screenshot of the forum.

How the forum appeared on the Discuss Scratch page.

What the Forum Contained

As its name suggests, this forum was for the discussion of the Beta version of Scratch 3.0 that was announced on August 1st.

The topics in this forum generally praised, criticized, or offered suggestions for the beta.[1][2] Due to the how large an update Scratch 3.0 was, many Scratchers who were used to the layout and interface of Scratch 2.0 complained that they would find it difficult to adjust to the new version when it released. The larger changes to Scratch were common complaints in the forum, including:

A large amount of duplicate topics could be found in this forum.

Since the forum was created, it experienced a surge in activity, with new topics being made extremely frequently.[3] Many of these were from Scratchers who were unhappy with the transition to 3.0 and would like Scratch to stay as it is,[4][5] whereas some others started debates over whether Scratch 3.0 is better than Scratch 2.0.[6]

During the release of the Scratch 3.0 Beta, some Scratchers put their suggestions for it in the suggestions forum, rather than in the beta's own dedicated forum.[7][8]

Retrieved from "https://en.scratch-wiki.info/w/index.php?title=Scratch_3.0_Beta_(forum)&oldid=278772"
Cookies help us deliver our services. By using our services, you agree to our use of cookies.
Categories: