Unlike the Scratch website, there was no community feature. Instead, projects could be shared elsewhere as .sbx files. ScratchX did not require an account. However, Scratchers could discuss ScratchX and Scratch extensions on the Developing Scratch Extensions forum available in the ScratchX footer.

An example of a ScratchX block.

There were three main ways ScratchX could be used.[5]

It was not possible to open a project with experimental extensions from the ScratchX site in Scratch 2.0 or the offline editor because the extensions were not supported by the Scratch Team. Alternatively, sbx files may have been sent peer-to-peer to be used in other copies of ScratchX. 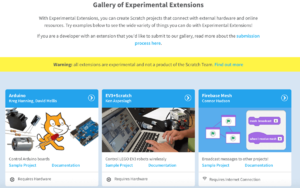 An image of the ScratchX Gallery.

Developers could submit their extensions to be highlighted on ScratchX by emailing them.[6]

The requirements to be featured in the ScratchX library were:[7]

Scratch Team released a new extension testing platform for use in Scratch 3.[8]

Retrieved from "https://en.scratch-wiki.info/w/index.php?title=ScratchX&oldid=275249"
Cookies help us deliver our services. By using our services, you agree to our use of cookies.
Categories:
Hidden category: