This article is about the programming language. For its editor, see User Interface. For its website, see Scratch Website. For the current version of Scratch, see Scratch 3.0.

Scratch is a free, educational, block-based programming language that is developed by the Lifelong Kindergarten Group at the Massachusetts Institute of Technology (MIT). The current version, 3.0, can be used in the online editor here or downloaded here (the previous version, 2.0, can be downloaded here). It is targeted towards kids ages 8–16.

Scratch is designed to be fun, educational, and easy to learn. It has tools for creating interactive stories, games, art, simulations, and more. Users program in Scratch by dragging blocks from the block palette and attaching them to other blocks like a jigsaw puzzle. Many connected blocks are called scripts. These scripts then control sprites that can perform actions on the stage. This method of programming (building code with blocks) is referred to as "drag-and-drop programming". Scratch also has its own built-in paint editor and sound editor.

Projects that users create can be shared to the Scratch Website, making them visible to everyone. One of the core features of Scratch is remixing, in which users can change and re-share other users' projects. Users can communicate and discuss in the Scratch community by posting comments and using the Discussion Forums. There are currently over 95 million registered users and 111 million shared projects.[1]

Scratch began development in 2003 and was released to the public in 2007. The idea behind Scratch was inspired by work in the Computer Clubhouse where children wanted to created interactive stories, games, and animations but there were no tools that could easily do this. The Lifelong Kindergarten Group was also inspired by Logo and EToys.[2] Scratch 1.0, the first stable version, lacked many of the features now present. At that time, only the offline editor existed, and the website was a small blog where projects could be uploaded and played. As Scratch became more popular, the website grew with it. Scratch 1.1, Scratch 1.2, Scratch 1.3, and Scratch 1.4 were released. At this point, Scratch had millions of users, projects, and many new features.

Upon the release of Scratch 2.0 in 2013, the website and User Interface were changed. Scratch continued to grow, achieving 30 million users and projects in 2018.[3] Scratch 3.0, which was released on January 2, 2019, updated the look and feel of the website and editor and added many new features, such as new extensions.

Scratch is widely used in schools around the world as a means of introducing basic computer programming to children. It is also used outside of schools. Some teachers even use Teacher Accounts to monitor students while having fun in the Scratch Community. Children and even adults gain an understanding of the fundamentals of programming with Scratch and often move on to other programming languages. During their use of Scratch, people can create, remix, and collaborate with others on Scratch projects. 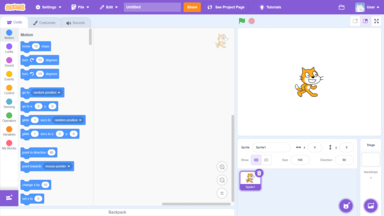 In designing the language, the creators' main priority was to make the language and development environment simple, intuitive, and easily learnable by children who had no previous programming experience. There is a strong contrast between the powerful multimedia functions and multi-threaded programming style and the rather limited scope of the Scratch programming language.

The user interface for the Scratch development environment divides the screen into several panes: on the left is the blocks palette, in the middle the scripts area, and on the right the stage and sprite list. The blocks palette has code fragments (called "blocks") that can be dragged onto the scripts area from the palette to make programs. To keep the palette organized and for ease of use, it is organized into nine groups of blocks: motion, looks, sound, control, events, sensing, operators, variables, and more blocks.

Projects that users create can be shared on the Scratch Website and be viewed by others.

"Scratch" was used as the title for The Lifelong Kindergarten Group's programming language, as it is to do with "scratching" referring to music.

Likewise, within Scratch, you take different bits of code (blocks), put them together, and have made something new.

Variants of the Word

The word "Scratch" has spawned other phrases that have become popular amongst users of Scratch:

Scratch's motto is "Imagine, Program, Share". This follows the basic principle of creating a project: one comes up with an idea ("Imagine"), programs the idea in Scratch ("Program"), and then publishes it in the community ("Share").

Scratch is currently on version 3.0. The online editor was officially released on January 2, 2019, and the offline editor at a later date. Its predecessor is Scratch 2.0, which was released on May 9, 2013. The previous, older versions are Scratch 1.4, Scratch 1.3, Scratch 1.2, Scratch 1.1, and Scratch 1.0. Each version had significant changes, especially the jump from 2.0 to 3.0. Not only did the program update with version 2.0 and 3.0, but the entire website was redone.

Scratch has limited hardware/OS access and is a very safe program. The following can be accessed by Scratch:

ScratchJr is a programming language based on Scratch that utilizes visual-centric content to introduce 5 to 7 year olds (its intended audience) to the programming world. It was developed in part by some members of the Scratch Team, and it is available on iOS and Android as a mobile app.

Retrieved from "https://en.scratch-wiki.info/w/index.php?title=Scratch&oldid=315283"
Category:
Hidden category:
The Wiki is working on a dark theme, and you're seeing it! Got feedback? Post on the Wiki Forum Topic.