Reports can also be sent to law enforcement under very rare and serious circumstances, usually if it violates a law.[4][5] 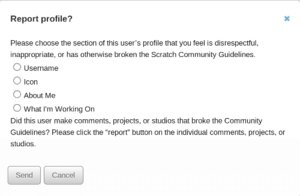 False reporting, is the act of reporting a project when it does not break the Community Guidelines or is not otherwise inappropriate. It can often lead to the project being automatically taken down. Many of the projects that are false reported belong to famous Scratchers. False reporting can be an attempt to take down a project, and can be problematic because it can drown actual reports. However, projects that are taken down after being false reported by several users are restored after review from the Scratch Team. Additionally, a reputation system exists to reduce the likelihood of a project being automatically taken down due to false reporting.[9]

Mass Reporting is when a single user or a group of users repeatedly report a project and it gets taken down. Despite the common misconceptions, mass reporting is not the same as false reporting, as mass reporting also takes down inappropriate projects, not only falsely reported ones. However, sometimes users will claim they were mass reported when one of their projects was legitimately removed to avoid admitting that their project broke the Community Guidelines or that they accidentally unshared the project.[10][11]

Some users threaten to report other users, whether there is a legitimate reason to do so or not, for example, these hypothetical comments.

When a post is reported, a message is sent to all the Community Moderators and members of the Scratch Team, who can process it. In Scratch 1.4 and Scratch 2.0,[16] if a post was reported four times by four different Scratcher accounts, it was automatically hidden and the user who posted it was temporarily banned for the remainder of one day, during which time the Scratch Team could look into the issue. 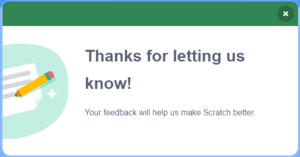 Retrieved from "https://en.scratch-wiki.info/w/index.php?title=Report&oldid=318865"
Categories:
Hidden category:
The Wiki is working on a dark theme, and you're seeing it! Got feedback? Post on the Wiki Forum Topic.