A remix is a modified and shared version of an uploaded project. Remixes, like all projects, are always under the Creative Commons Attribution-Share Alike License, the license Scratch uses. As of May 2022, around 30% of all recently shared projects are remixes.[1]

The Scratch Team uses the word remix because it is what musical artists call changing a song by using the same tune but changing the style. It is also related to the word "Scratch," as in "scratching" like a DJ does with records, also related to music.[citation needed]

Before deciding on remix, it was called "mod",[3] but following the creation of many modifications of the Scratch program, the word "mod" got a new meaning. It is now the name for a Scratch Modification. Mod can also have other meanings. 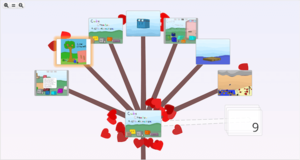 The Remix Tree was a way of showing an extensive hierarchy of remixes originating from one project. To access the remix tree of a project, one clicked the "tree" button at the rightmost edge of the project statistics bar. When visualized, hearts were bundled near projects with many love-its, and anyone could navigate through the various branches and explore the chains of remixing. If a project had too many remixes, not all of the remixes would be shown simultaneously. Instead, one could select folders of remixes which will then unravel into other remixes. However, there was an issue where sometimes branches would go under the screen, and the rest of the branch was not visible in any way.

The button was removed in Scratch 3.0, due to its lack of use and necessity.[citation needed] However, remix trees can still be accessed by adding /remixtree to the end of the URL of any shared project.

These projects involve one or more characters (two most of the time[citation needed]) fighting each other. Users involved remix the project, adding a new character inside the battle or doing a move. Successful battles often make a lengthy remix chain. The users who want to battle the owner remix the owner's battle project that has a character in it and add their own characters and start a new battle. It acts like a Turn-Based RPG but involves two or more users.

These projects center around a specific subject the project creator likes, and asks for users to remix and sign their username in support of the subject. The goal is to get as many signatures as possible. An example of this trend would be "Remix and Sign if You Like Cupcakes"

Similar to "Remix and Sign if You Like ___" projects, these projects also involve receiving as many signatures as possible. They often relate to issues the project creator wants to change, such as bullying or climate change.

Some Scratchers, rather than remixing a project, download the project and upload it without changing anything. Called Project Copying, this practice is disallowed; any project copies should be reported, with a link to the original project given in the report. For this reason, it is important to keep track of remixes of your project. This is made easier by notifications for remixing. Sometimes people download and upload the file so it is not shown as a remix and looks like they did all the work. These should still be reported.

Some Scratchers, especially those who specialize in art projects, do not like the remixing feature, and think that there should be a way to disable it. This is a rejected suggestion. There has been controversy over "stealing" art, and although making an exact copy is not allowed, and should be reported, any change, even a vary minor change such as a recolor of one sprite, makes it a legitimate remix. One of the largest complaints is about recolors, because some users feel that recoloring an art project or just changing the character sprite in a game, or similar changes, should not qualify as remixes.[9][10][11][12] However, remixes that change something, no matter how small, are allowed. All projects that threaten all kinds of remixes (such as saying "no remixes" and using coded remix "blockers") should be reported.

One controversy occurred over remixes which were unrelated to the original project, such as deleting everything in an animation and replacing it with a game, either created by accident or to gain views by showing in the list of remixes to a popular project.[13] This issue is very debatable; some say they do not harm Scratch at all and should be left alone, some say that they game the system and should not be tolerated. The Scratch Team has stated that this is not allowed.[14]

There is a bug that allows you to remix your own project.[15] First log into another account (such as a test account). Open a new tab and see inside one of your main account's projects. Then in the first tab switch back to your main account. On the second tab click "remix". This will not only give you a copy of your project, but also make it show up in the remix tree.

Retrieved from "https://en.scratch-wiki.info/w/index.php?title=Remix&oldid=311661"
Cookies help us deliver our services. By using our services, you agree to our use of cookies.
Categories:
Hidden category:
The Wiki is working on a dark theme, and you're seeing it! Got feedback? Post on the Wiki Forum Topic.