The Question Mark Glitch is a glitch in Scratch 3.0 where sprites would seemingly randomly be replaced with a question mark in a box. The glitch was first reported on May 30, 2019[1] but became very widespread for a short period on April 8, 2021.[2][3][4] 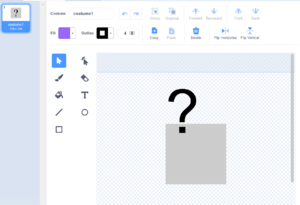 A costume replaced with a question mark in a box

A large number of users were affected by this glitch on April 8, 2021. This was caused by a failure in the asset server, where the editor failed to download costumes properly and used the question mark placeholder as a result of the error. The asset server failure was caused by re-processing and re-saving all vector assets, leading to a massive increase in server load that caused intermittent outages.[6][7][8] A Scratch Team member later clarified that they were attempting to restore affected projects to an earlier version and advised users not to continue further work on them.[9]

The bug did not affect all projects, and even within an individual project, some sprites were affected but others were not. Some sprites in backpacks were also affected.[10] The bug affected users on all platforms, as it was a failure on the server.

Retrieved from "https://en.scratch-wiki.info/w/index.php?title=Question_Mark_Glitch&oldid=303725"
Cookies help us deliver our services. By using our services, you agree to our use of cookies.
Categories:
Hidden category:
The Wiki is working on a dark theme, and you're seeing it! Got feedback? Post on the Wiki Forum Topic.