Project Downloading is when the code of a Scratch project is downloaded from the Scratch Website to the user's computer. In Scratch 2.0, this allowed a user to work on a project in the Scratch 2.0 offline editor, or other programs that can read Scratch files. For simply viewing the code of a project, See Inside could be used. 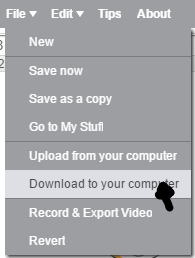 Downloading a project made in 2.0.

Downloading a Scratch 2.0 project was done from the online project editor. There was an option under the File menu, "Download to your computer". Upon clicking, the user would be prompted to choose a name and location for the file. It would be a .sb2 file.

Downloading a project made in 1.4.

If an online project was made in the Scratch 1.x series, and was never saved using Scratch 2.0, it could be downloaded by clicking "Embed" beneath the project viewer, then "Download code", as in the image to the right. This would download a .sb file. Depending on the user's web browser, a download window may or may not appear.

Most of the past benefits of downloading projects were lost in Scratch 2.0, with the introduction of See Inside and the backpack. Users previously would download projects to view or edit the scripts, or use media from the project, but all of this could be done online in 2.0. Some reasons to download a Scratch 2.0 project were:

Some Scratchers support the idea of an option to lock downloads, or lock "See Inside" on a project,[1][2] as it would prevent others from stealing their work, allow private scripting, and so on.

However, the suggestion was rejected due to the fact that remixing is an important part of Scratch.[3] The suggestion was also against the Creative Commons license, that Scratch projects are under, which allows remixing.[4]

Several quotes had been mentioned here, including:

Despite the explanations, the idea is still supported by some Scratchers because it can be a way of preventing project copying or art theft.

However, some people have created their own remix blockers. However, this is highly discouraged and should not be used, as it will result in alerts and eventually a ban. If a project uses a remix blocker, please report it.

Retrieved from "https://en.scratch-wiki.info/w/index.php?title=Project_Downloading_(2.0)&oldid=315576"
Cookies help us deliver our services. By using our services, you agree to our use of cookies.
Categories:
The Wiki is working on a dark theme, and you're seeing it! Got feedback? Post on the Wiki Forum Topic.