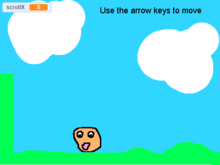 Platformers can have scrolling for the smooth transition between locations as if the camera is following the player. This implies that the terrain/map would move to create space for more terrain, which means that the character sprite is always in one place on the screen. This is very useful as it can allow the creator to increase the level size and create a more realistic view, thus can give the user a more enjoyable time. However, this type of platformers usually requires more work than non-scrolling platformers.

Platformer levels can also be non-scrolling. The action of contacting the edge of the screen or reaching a goal triggers a transition to the next location. Usually it is the next level. Static Platformers may be easier to code for some users due to their lack of a requirement for additional code to create the scrolling effect.

Platformers can also scroll in a circular motion, eventually moving 360 degrees. Completing the circle will then start a new level, sometimes in a new world, like from the Moon to Mars. As mentioned above, this kind of platformer is similar to scrolling platformers in the way that the player moves through the game. As in traditional scrolling platformers, spikes and other dangers will start the player over at the beginning of the level.

Retrieved from "https://en.scratch-wiki.info/w/index.php?title=Platformer&oldid=319787"
Cookies help us deliver our services. By using our services, you agree to our use of cookies.
Categories:
Hidden category:
The Wiki is working on a dark theme, and you're seeing it! Got feedback? Post on the Wiki Forum Topic.