Pixel art of a lumber­jack.

Pixel art is an art style where everything is "pixelated", meaning that the sprite appears to be made out of enlarged pixels.

What is pixel art?

Pixel art is a form of digital art. It is made with software where images are edited on the pixel level, and sometimes enlarged if it appears too small. An example of a similar drawing software is Scratch's bitmap editor.

Pixel art on Scratch is used in a variety of media, from animations to games to simulations. It is one of the more common types of art on Scratch, and one of the only forms of art that is extremely difficult to recreate in the vector editor.

Users commonly set the paint editor to the bitmap editor when creating pixel art. While it is possible to make pixel art in the Vector Editor, it is typically considered much more difficult.

Customarily, Scratchers than set the brush size to a smaller setting than the default size, and zoom in. It is now in the shape of a single square, one of the smallest sizes the bitmap editor can handle. From there, the user starts drawing the shape. At this point, it is suggested to avoid clicking and dragging as much as possible. Instead, carefully place each square where it must go, and repeat the process.

When making pixel art, it is usually best to start with the outline first, and then fill in the details later. The shape is often thought of as one of the hardest thing to figure out, but separating it into parts may help. After the shape has been separated, usually into rectangles, the outline would be drawn. Afterwards, users begin to fill in the inside with the appropriate colors for their desired shape. For example, if a user decided to create a pixel of a banana, the top may be colored in brown, while the rest would be colored in yellow.

If shading is wanted, users generally use a slightly darker color than the base color of the shape, and place pixels along the side of the outline. The side with shading will be opposite from the side which the light is desired to be coming from.

Other methods for creating pixel art

There are other methods for making pixel art that don't require as much work, but may not look as good as hand-drawn pixel art. 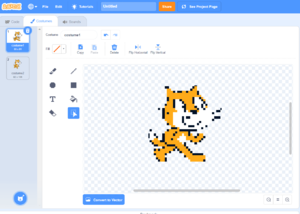 An example of pixel art created using the bitmap editor

Making Pixel Art on Other Websites

It can be used from platformers to even the simplest projects, and the art is usually better[explain][citation needed] than the bitmap editor, because the websites are designed for pixel art.

Before pixelating using the bitmap editor, and after.
Retrieved from "https://en.scratch-wiki.info/w/index.php?title=Pixel_Art&oldid=288735"
Cookies help us deliver our services. By using our services, you agree to our use of cookies.
Categories: