Pi Day is the celebration of the irrational number commonly known as Pi. Pi is often substituted with the symbol π, the 16th letter in the Greek alphabet. Pi can be found using the circumference of any circle divided by the circle's diameter. The value of Pi in mathematics is equal to approximately 3.14, however the digits go on infinitely. Pi Day is celebrated in many places and across the internet on March the 14th, because on this day the date is 3/14.

Pi Day has been celebrated by Scratchers all over the website on March the 14th in the past, so much so that it has arguably become part of Scratch's Culture.[1] Several projects,[2][3][4] studios[5][6][7] and forum topics[8][9][10] have been created for Pi Day in the past. Some of these were created by Scratch Team members,[11][12][13] later went on to be featured,[14][15] or was a Scratch Design Studio.[16] Usually the Pi Day studios are created by Scratch Team Member Paddle2See, although in 2016 no studio was made by Paddle2See. 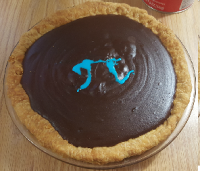 A picture of a computer clock displaying Rounded Pi Second.

There were two different forms of Rounded Pi Second.

Pi Day projects often contain features such as Pie-throwing games,[2] Songs,[17][18] Pi Day countdowns,[19] Pi calculators[20] and other Pi-related content. Pi Day studios often contain information about Pi Day[12] and competitions, such as who can memorize the most digits of Pi.[7]

Pi Day is also celebrated outside of Scratch. Common activities on Pi Day include eating pie, throwing pies and discussing pi with others.

Retrieved from "https://en.scratch-wiki.info/w/index.php?title=Pi_Day&oldid=308334"
Cookies help us deliver our services. By using our services, you agree to our use of cookies.
Categories:
Hidden category:
The Wiki is working on a dark theme, and you're seeing it! Got feedback? Post on the Wiki Forum Topic.