This article is about the editor on the Scratch Website. For the layout of the editor, see User Interface.

This article or section documents the current version of Scratch (version 3.0). For this article in Scratch 2.0, see Online Editor (2.0). 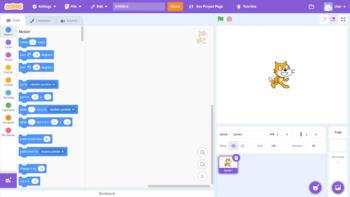 The layout of the Online Editor.

The online editor is the area where users can edit projects on the Scratch Website. It was first added in the release of Scratch 2.0 and was updated for Scratch 3.0.

The online editor is programmed in JavaScript. It can be found here.

Differences from the Offline Editor

The online editor has several differences from the Offline Editor:

Retrieved from "https://en.scratch-wiki.info/w/index.php?title=Online_Editor&oldid=306403"
Cookies help us deliver our services. By using our services, you agree to our use of cookies.
Categories:
The Wiki is working on a dark theme, and you're seeing it! Got feedback? Post on the Wiki Forum Topic.