(Redirected from Notes and Credits) 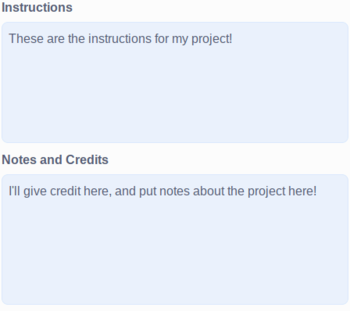 The Project Information feature is a way for Scratchers to type documentation that goes alongside their projects for other Scratchers to see and understand what the project is about. They are separated into two sections, the "Instructions," and the "Notes and Credits." Only the sharer of the project or a member of the Scratch Team can edit the project notes. This is to avoid false information and to ease the project's owner. However, a Scratch Team member often only edits another user's project notes to delete content that breaks the Community Guidelines. Project notes can be found on the right of a shared project's page.

There are two sections to the project notes. If the instructions are left blank, the Notes and Credits section takes up the whole column, and this also works vice versa. 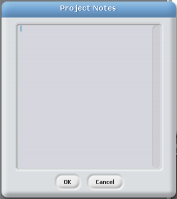 Because of crediting problems when remixing, the section is also outlined blue and has a prompt to add credits when a project is a remix. The box and prompt goes away when something is typed in the box. 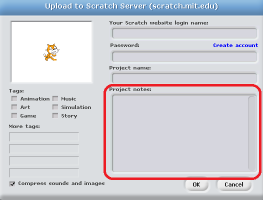 Retrieved from "https://en.scratch-wiki.info/w/index.php?title=Project_Information_and_Help&oldid=317542#Notes_and_Credits"
Cookies help us deliver our services. By using our services, you agree to our use of cookies.
Categories:
The Wiki is working on a dark theme, and you're seeing it! Got feedback? Post on the Wiki Forum Topic.