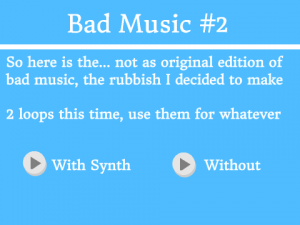 An image of a self-composed music project.

A music project is a project where music plays a key role. They might involve imported music files or music generated or recorded with the Scratch program.

Sounds can be generated by the Scratch program, which allows the user to choose from a variety of instruments. Currently, there are 21 different instrument timbres that can be used.

Alternatively, for more realistic sounds, Scratchers can record themselves with the Scratch program's microphone.

An AMV, or "Animated Music Video," is an animation shaped around the lyrics and tune of a song played in the background. They are very popular on Scratch and often reach the front page.

Recordings vary in style and genre: they can be vocal or instrumental, pop or classical.[1] They are also known as covers.[2]

Some projects recreate music from games, movies, or TV shows. This can be done by using sound blocks, or by using a recording or video. This type of music project is not to be confused with game projects that simply have music playing in the background.

Some projects play existing songs in reverse, often made for amusement or humor. This is made with the Sound Editor. Some reversed music projects will have "lyrics" added in them, which references "backmasking", a music technique.

Some Scratchers compose their own music and release it on Scratch. Music can be created in a digital program, or can even be a recording.

Chords can be created by playing two or
more of these scripts at the same time.

Some users prefer to make music in Scratch by taking advantage of its sound blocks. Users can build scripts with music blocks that play in sequence. Multiple scripts played together can create chords.

UTAU is a free singing software named after the Japanese word for "To Sing." Many Scratch users have created their own UTAU characters and shared songs featuring them.

Many users create projects which have an MP3 file or any other file type as the main activity in the project. These projects are generally One Sprite One Script projects and are not difficult to recreate. However, these project are no longer allowed on the Scratch website as stated below in the "Music Projects Restriction" section.

Example of a One Sprite One Script project that plays a song.

In early 2016, it had been reported that over 40,000+ URLs to music projects on Scratch were requested for take-down from the Google results by the British Phonographic Industry,[3][4] due to the use of copyrighted music. No action was taken, however.[citation needed] This caused an outcry on the Scratch Community,[5] similar to the notable events of Removed Pac-Man Project and Animation Hall of Fame.

On June 8, 2017, it was announced that projects solely playing music not by the creator will be taken down, due to the possible risk of copyright infringement and not promoting creativity in general.[6] Many users complained about this, because other sites for downloading music, such as YouTube, are blocked in schools, and that users can easily use the backpack for getting music to use in projects instead of having to download them to their computer.

Retrieved from "https://en.scratch-wiki.info/w/index.php?title=Music_Projects&oldid=275848"
Cookies help us deliver our services. By using our services, you agree to our use of cookies.
Category:
Hidden category:
The Wiki is working on a dark theme, and you're seeing it! Got feedback? Post on the Wiki Forum Topic.