Custom blocks also help by reducing project file size and allowing the user to disable screen refresh. Number, String, and Boolean inputs can be added to custom blocks. For example, a Scratcher could make a jump ():: custom block with a "height" input, and (height:: custom-arg) will appear in the Define block. These blocks can be dragged out and used in the definition just like variables.

The Scripts category was removed in Scratch 28Feb05. Procedures would not be added back until Scratch 2.0. 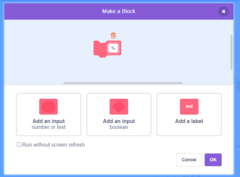 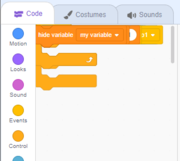 If a custom block has a label of "%", you will not be able to confirm and press Okay (left). The only options are Cancel and exiting. If the block palette is scrolled up after that, the blocks will be bunched up together (right). This can be fixed by unloading the block palette by leaving the sprite, going to the costumes, sounds or seeing project page.

In the dialog, if you type something (like "hello world") then "%n", and add a Boolean input, the whole custom block input panel will only say Boolean. Then if you add a label, and click the OK button the whole code panel will crash, and it will give you an error message.

Retrieved from "https://en.scratch-wiki.info/w/index.php?title=My_Blocks&oldid=319144"
Cookies help us deliver our services. By using our services, you agree to our use of cookies.
Categories:
Hidden category:
The Wiki is working on a dark theme, and you're seeing it! Got feedback? Post on the Wiki Forum Topic.