Mod Share is a website that allows users to upload projects made in Scratch modifications. Three versions of the site were closed for different reasons.

Mod Share was at first created by Daffy22 with the help of LS97 at mod-share.freehostingcloud.com to share projects made in Scratch modifications.

In March 2010, Mod Share was attacked by anonymous trolls through the technique of JavaScript Injection, and was forced to close down.

Following the attack on V1, LS97 recreated a more secure and user-friendly version at mod-share.webuda.com following the original idea. This version added a user system that allowed Scratchers to track their uploads.

Mod Share 2 was then closed by the hosting provider for excessive CPU usage. As a result of this, LS97 teamed up with jvvg to create the third version of Mod Share, with a bunch of new features.

Mod Share 3 was released on the 14th of January 2012. It was located at modshare.tk. It contained a lot of new features, including the ones listed below.

Due to the fact that Mod Share 3 was deleted by the web host for claims of inactivity (although it was put back up later), LS97 and jvvg decided it was time for something new. It includes more efficient code, a better friending system, better security, and better integration with some mods (mainly Bingo 2.0 and Insanity 1.1), allowing for a direct upload from those mods.

Mod Share allows the upload of any SB file, but also supports the following Scratch modifications: 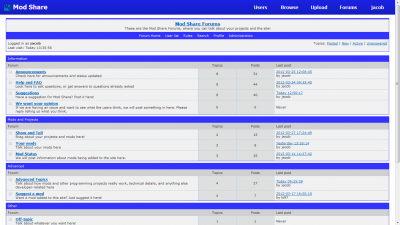 A screenshot of the forums with the Mod Share header integrated. 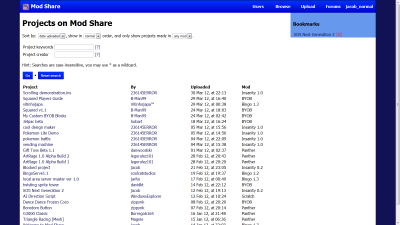 A screenshot of the current browse page, featuring the search engine at the top 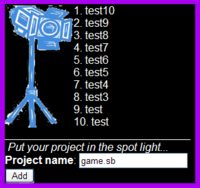 A screenshot of the old spotlight.

The spotlight was a way to get a project that one uploaded in the "spotlight", which had a place on the front page. By entering the name of one's project, the spotlight would post it on the homepage so the project would get extra views and more constructive comments.

For April Fools' Day 2013, Mod Share changed its name and theme of the site to parody the TV show America's Got Talent, in the vein of April Fools' Day on the Scratch Website. It was also announced that Kaj would join the Mod Share Team.[3]

On August 29th, 2013, jvvg announced that non-critical support on Mod Share had been ended. With this it was also announced that new features will not be added and further mods are not going to be added to the site.

The decision was made due to financial issues as well as a lack of interest. The website was moved after October 2014 as a read-only archive to FutureSight's website.

Since the end of life of the Flash Player in December 2020, projects on Mod Share can no longer be played online and must be downloaded.

Retrieved from "https://en.scratch-wiki.info/w/index.php?title=Mod_Share&oldid=319239"
Cookies help us deliver our services. By using our services, you agree to our use of cookies.
Categories:
The Wiki is working on a dark theme, and you're seeing it! Got feedback? Post on the Wiki Forum Topic.