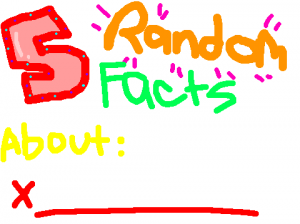 The 5 Random Facts About Me meme.

The high remix count of a Scratch meme.

A few projects tagged with the word 'meme'.

A Scratch Meme is a project, usually comedic, that is intended to be adapted when it is passed from person to person. One example of these are projects with a list of questions that are answered by other Scratchers via remixing.

One example of a Scratch meme is a question-based project. These projects typically ask Scratchers for a list of personal favorites, dislikes, facts, etc. Some memes will ask for the Scratcher to tag other people to continue the meme, although this is not necessarily the case for all meme projects: some Scratchers will remix a meme willingly on their own accord.

Another Scratch meme which largely occurred in September 2010 is "X Ying while I play unfitting music".[citation needed] In it, there was a commonly known character X, and Y was a certain action. Thus, there would be a short looping animation being played, while random music was also being played. In addition, users would comment on how fitting the music is.

Yet another example is a project that features a character, usually an animal OC or otherwise, dancing to a song and users are encouraged to remix the project and create a sprite that does the same dance. This is known as an animated meme.[citation needed]

Although there are a few broad and common types of Scratch memes, they usually come in a variety of forms, asking Scratchers for their answers of varying and wide arrays of topics, such as rapidly-remixed projects.[citation needed] One of the most well-known Scratch Memes is Random Facts About Me Meme, which calls for a Scratcher to list five random facts about themselves, and then tag five people afterwards.[citation needed]

This is an example of a meme.

Also popular on Scratch are Internet memes in the traditional sense—concepts, often media, like songs, images, or videos which become popular and circulate around the Internet. These are used both in projects and on the Scratch Forums.[citation needed] Some examples of popular ones on the site include "Gangnam Style", the epic face emoticon, ALS Ice Bucket Challenge, the trollface, "Shoop da whoop", "dab", ponies from My Little Pony, Weegee, asdfmovie, "Yee", various Sonic memes, creepypasta, and countless others.[citation needed] As new trends pop up on the internet, they often do on Scratch as well.[citation needed]

However, there have been a few cases where some Internet memes are deemed offensive for the site or some users, and therefore get banned. Examples would be the Tide Pod challenge[1] and Ugandan Knuckles.[2]

Some people on Scratch think that Scratch Memes are not actual memes.

Retrieved from "https://en.scratch-wiki.info/w/index.php?title=Scratch_Meme&oldid=296790"
Cookies help us deliver our services. By using our services, you agree to our use of cookies.
Categories:
The Wiki is working on a dark theme, and you're seeing it! Got feedback? Post on the Wiki Forum Topic.