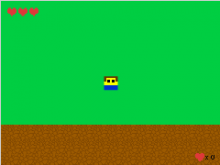 Adventures in Mapa, a complex game based on simple skills that many maze games share.

Mazes are a common form of game type projects, as they tend to be particularly easy to program. A common form of maze creation involves barriers in which if come in contact with another sprite, will send that particular sprite being controlled by the user, to the beginning of that stage of game-play. Other variations, such as scrollers, do not let the user go through the walls. Other maze games have multiple backgrounds which mimic a feel of different levels, rooms or places. Most maze games have different levels with different themes. Some maze games have the character control the main sprite by means of the mouse pointer.

This maze game has simple programming that uses conditional statements to move the sprite.

STM (Short Term Memory) maze games are the simplest of maze games that do not require the green flag to be pressed but instead use conditional statements to move the sprite. Most STM maze games also cause for the controlled sprite to go back to a stated point on the stage after touching barriers and to change to the next level once the goal has been reached.

This maze game has simple programming and a look that resembles to that on a sheet of paper.

A room in a complex maze.

Retrieved from "https://en.scratch-wiki.info/w/index.php?title=Maze&oldid=255108"
Cookies help us deliver our services. By using our services, you agree to our use of cookies.
Category:
The Wiki is working on a dark theme, and you're seeing it! Got feedback? Post on the Wiki Forum Topic.