Intros and Outros are used on Scratch to begin/end a user's project, usually an animation. Users can create their own intros or outros, or have another user make them in the requests forum.

The term "Intro" comes from an abbreviation for "introduction". "Outro" is said to be slang for the opposite.

An intro is a short animation used in the beginning of a project, typically containing the username of the project creator, the profile picture or an original character belonging to the user, along with some sort of music.[1][2] Despite that they can be seen in any kind of Scratch Project, it is more common in game, simulation and animation projects.[citation needed] 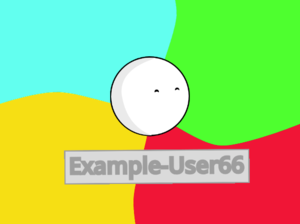 Here is an example of an intro, with an original character and a username

Intros give a brief introduction about the user, typically less than 10 seconds long. It has the users' logo and their username which is accompanied by music.

Some intro makers create intro templates for others to use in their projects (often noted by including "intro template", or "free intro" in the title). [3] Free intros usually contain "NAME", "TEXT" or "USERNAME" instead of a certain username, which the person using the template would substitute as appropriate.

Intros can be flashier or quieter, longer or shorter, and they can contain many effects: clones, graphic effects, music, etc.

An outro is an animation used to end a project. Often the animation is endless and will continue to loop after the project ends. Outros many times contain flashing lights, spinning characters or logos (most commonly a word or phrase used to denote a conclusion, e.g. The End, or the username of the project creator), and music (usually some sort of upbeat or bass-boosted music); although, there might be static outros where nothing moves in the outro. Outros seem to be the more common of the two. [citation needed] A common theme in outros are drawings/images of a star (meaning favorite), a heart (meaning love), a follow button or blue human silhouette (meaning follow), a speech bubble (meaning comment), and sometimes a spiral (meaning remix). These drawings indicate to the viewer that the creator is asking them to favorite the project, love the project, follow the creator of the project, remix the project, and/or leave a comment. 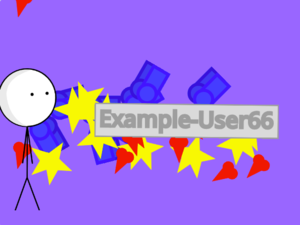 An example of an outro. Drawings of a heart, star, and a part of the follow button can be noticed. There is also a character on the left side.

An uncommon practice is adding the thumbnail of a different project to the outro,[4] sometimes encouraging the viewers to follow them on other social media platforms as well,[5] or adding one or multiple links to other projects they made. Some users put links to other projects via lists that contain such links; in order to view the project provided by such a link, one can simply copy the link and paste it into the URL bar.

This section shows how to create an intro or outro.

Like this, as many objects can be created as the scratcher decides.

Retrieved from "https://en.scratch-wiki.info/w/index.php?title=Intros_and_Outros&oldid=304862"
Cookies help us deliver our services. By using our services, you agree to our use of cookies.
Category:
The Wiki is working on a dark theme, and you're seeing it! Got feedback? Post on the Wiki Forum Topic.