How to Publish Scratch Projects on itch.io

itch.io is a website for Indie games. Such independent games are created without the support and influence of a publisher, so indie games are often shorter and less optimized. However, indie games have a high degree of creativity and innovation put into them. Since the website itch.io is free and very open to various platforms, it is possible to host excellent Scratch games there in order to show them to a wider audience or to participate in a Game Jam.

When is the Game Good Enough?

In contrast to the educational character of Scratch, itch.io is a site for game developers. If one would like to publish the game then it should:

There are no formal criteria for publishing a game on itch.io but bear in mind that a bad game degrades a standing on itch.io and affects the general reputation of Scratch games.

Can One Sell Their Game There?

Itch.io also makes it possible to ask for money for a game. The Scratch license also permits such commercial use. Remember, however, that many games on itch.io are free and only very elaborate games are sold. We, therefore, recommend that you publish your first games there without a pricing.

How Does One Publish a Scratch Game on itch.io?

To do so, you need an account at itch.io. This can be created free of charge. Then you can log in with your username and password at itch.io and call the so-called dashboard. Then click on the button Create new project.

After that, you get to a mask in which the data for the game are entered.

Then we need an HTML file with the game link. To do this, create a new text file and enter the following code:

The number 12021962 must be replaced by the project number in your project's URL on Scratch.

Then rename the .txt file to index.html and upload it via the game page (highlighted with a green border in the example). Then select "This file will be played in the browser".

Now you can test your game page and if necessary adjust the colors or insert a banner or background image. If your game page is fine, publish your game by setting the visibility (Visibility, highlighted on the right with a blue frame) to "Public". 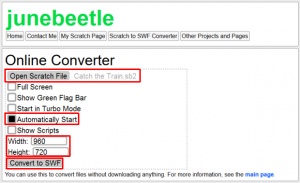 In this approach, the project is uploaded to itch.io as a Flash file (.SWF). First, the game page should be set up as described under "Possibility 1". However, you should now select "Flash" at item 4 ("Project type").

Before uploading, the scratch project must be converted to an SWF file. This can be done with Junebeetle's Online Converter.

To do this, you must first save the Scratch project as an.SB2 file in the editor via "File" -> "Download to your computer". This file is now to be selected in Junebeetle's Online Converter. The settings for autostart and a resolution of 960 x 720 are recommended.

Then click on "Convert to SWF" to download the Flash file with your Scratch project. Then upload this SWF to the itch.io page of your game ("Select this file will be played in the browser").

After saving the game page on itch.io, you can test your game page as described above and, if necessary, adjust the colors or insert a banner or background image. If your game page is fine, publish your game by changing the visibility (visibility, in the picture to the right with a blue frame).