(Redirected from How do I Change My Featured Project?)

This article is about the profile page feature. For the project row on the Front Page, see Featured Projects. 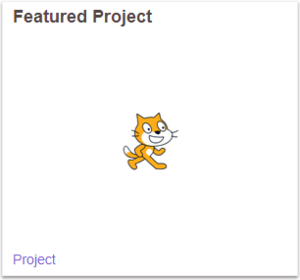 A featured project on a profile page.

The button that appears in the top left corner of the featured project.

A featured project is an area where a Scratcher can feature a single project on their profile page. This feature works like a showcase, and allows a user to show off their projects in a modest way. The project that is featured is located at the top of the page, between the About me section and the What I've been doing section. The project's thumbnail and a link to the project is displayed, with a label like "Featured Project" or "Remix this!" Some Scratchers have suggested you be able to type in your own label instead of having to choose from the options.[1]

How to Change Your Featured Project

You can change your featured project by scrolling your mouse over the project into the top left corner of the project. Then, a little black button should appear under your cursor. Click it, then select the project you would like to feature.

Optionally, you can select one of these labels:

It is possible to feature an unshared project. There are two ways:

There are many reasons to feature a project on a profile page, but several include:

The featured project used to only say 'Featured Project' above it as a description, but now it is customizable. This customization feature was added in an update on the 13th of February, 2015.[5] The description of this update was:

Retrieved from "https://en.scratch-wiki.info/w/index.php?title=Featured_Project_(profile_page)&oldid=308056#How_to_Change_Your_Featured_Project"
Cookies help us deliver our services. By using our services, you agree to our use of cookies.
Categories:
The Wiki is working on a dark theme, and you're seeing it! Got feedback? Post on the Wiki Forum Topic.