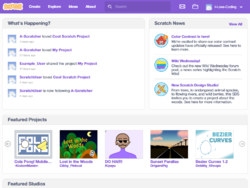 On November 18, 2022, the front page when signed out was changed to show tutorials.

When the website language was set to Meow, the 'Scratch News' text read 'SCRATCH MEWS'; if it was set to Edible Scratch, it used to be "Eater's Digest".

Retrieved from "https://en.scratch-wiki.info/w/index.php?title=Front_Page&oldid=317696"
Cookies help us deliver our services. By using our services, you agree to our use of cookies.
Categories:
Hidden category:
The Wiki is working on a dark theme, and you're seeing it! Got feedback? Post on the Wiki Forum Topic.