Hitboxes are common methods used for overworlds, platformers, etc. They are used as the shape that collide with other objects, as more detailed images can affect how smoothly the game runs. Like the name suggests, it's usually just a black rectangle, being the same general size. 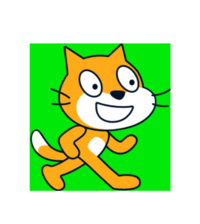 Scratch Cat with a suitable hitbox.

Uses of a Hitbox

Hitboxes are great ways of avoiding unnecessary lag in platformers and other similar games, and are also used for more detailed characters/player avatars. They generally make projects run smoother. When making a hitbox, it is essential that it is roughly the same size as the player; otherwise the hitbox can make games very inaccurate.[citation needed] Here are some methods in which you can program your own hitbox:

To start, create a new sprite for the hitbox and open the "Costumes" tab. If you haven't already, backpack (or download onto your computer if you are using the offline editor) the first costume for your character, then upload it into a blank vector costume in your hitbox sprite. Using the rectangle tool, draw a rectangle over your character and make it as small possible without any part of the character showing. When you remove the character from behind, you will have your hitbox.

After you have made the sprite, you will need a platformer script inside the scripts area. If you don't know how to make one, a tutorial can be found here.

This method uses one sprite with two different costumes.

The sprite will need a platformer script. After it has those scripts, put these blocks inside the main loop:

When you run your project, everything should be smoother.

Retrieved from "https://en.scratch-wiki.info/w/index.php?title=Hitbox&oldid=287746"
Cookies help us deliver our services. By using our services, you agree to our use of cookies.
Categories:
The Wiki is working on a dark theme, and you're seeing it! Got feedback? Post on the Wiki Forum Topic.