Scratch 2.0 had many hidden features dealing with clicking on a specific object or screen region while holding down the ⇧ Shift key, Ctrl key, or ⌘ Cmd key. Typically, these secrets were used to hide advanced features that would confuse a beginner who is new to Scratch.

Scratch Emojis were a feature which allowed commenting emojis on a studio, project, or profile. Emojis could not be used in project descriptions. Each emoji had a keyword associated with it that needed to be included for the emoji to appear. 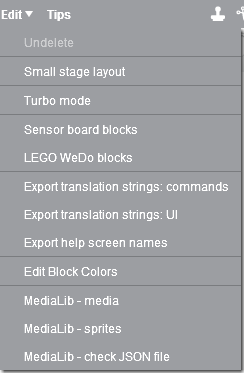 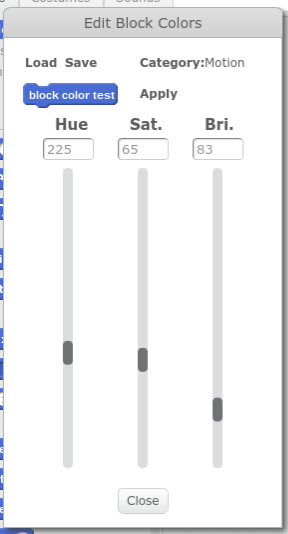 Shift-clicking the green flag ran the project in turbo mode, which ran the project extremely fast, having minimal to no wait between blocks. This was useful for solving large mathematical operations or running a 3D engine smoothly.

Holding the ctrl key (⌘ key on macOS) and clicking the green flag ran the project with no sound. This was useful for quickly muting a project.

Deleting a sprite with the "scissors" tool.

The top bar of the Scratch program contained stamper, scissors, outward arrows, inward arrows, and question mark buttons. After being selected, they could be used to duplicate and delete sprites, blocks, comments, costumes, and sounds, grow and shrink sprites and costumes, or get help for a block or specific part of the program. However, after performing that operation, typically the tool must be selected to perform the task again. As an alternative to the repetitively selecting the tool, one could hold down the ⇧ Shift key to use the tool multiple times without it exiting and requiring selection again.

When importing a new sprite, the ⇧ Shift key could be held down to import multiple sprites. Clicking on a selected sprite would deselect it, and vice versa. The same was true when importing costumes.

The paint editor itself had multiple features using the ⇧ Shift key.

When using the "duplicate tool" (stamper) in the vector editor, holding down the ⇧ Shift key while stamping allowed one to continuously stamp the same object without the need to re-select it.

The Scratch 2.0 vector editor used splines (control points) to store information on an image instead of a bitmap's array of pixels. When modifying these splines with the reshape tool, one could shift-click on a spline to disconnect that point from the object (split it at the location). Additionally, shift-clicking between two splines created a new spline which had a smooth bend and curvature relative to the two adjacent splines.

After selecting a shape (in vector) or an area of pixels (in bitmap), holding shift while rotating the shape would force the rotation to snap to angles that are multiples of 45 degrees. This was useful for rotating shapes at exactly those angle increments instead of having to manually line up the cursor to rotate to such angles.

Cropping sounds could be accomplished more easily by highlighting the area you want to keep and deleting the rest of the file. When a sound section is highlighted, one could hit ⇧ Shift+delete or ⇧ Shift+← Backspace to keep the highlighted section and remove the rest of the sound, cropping it to the desired section.

Shift-clicking the effects menu and selecting "louder" or "softer" would change the volume at a smaller interval than by doing so without holding shift.

Pressing ctrl+m (⌘ Cmd+m on macOS) would make Scratch toggle between using the Pixel Bender and Stage3D rendering engines. This was likely intended by the Scratch Team to be used for testing.[citation needed]

Retrieved from "https://en.scratch-wiki.info/w/index.php?title=Hidden_Features_(2.0)&oldid=307606"
Cookies help us deliver our services. By using our services, you agree to our use of cookies.
Categories:
Hidden category:
The Wiki is working on a dark theme, and you're seeing it! Got feedback? Post on the Wiki Forum Topic.