The general shape of a Hat block.

A Hat Block is a block that starts a script when a specific event occurs. All hat blocks are either Control blocks, Events blocks, My Blocks, or Extension blocks. In the Experimental Viewer, the first word of their name is capitalised.

There are twenty-four Hat blocks in Scratch. Sixteen are used for extensions. One is made with every instance of a custom block.

Hat blocks signal for the project to run a script after an event has happened, and therefore allows the code to be run automatically without a user having to click on the script to run the code. As there are 24 Hat blocks, there are 24 different forms of events that can occur to start a script.

Custom hat blocks cannot yet be created in Snap! 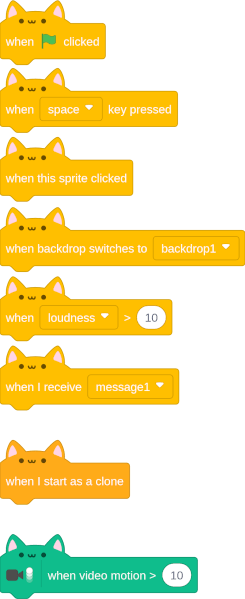 For April Fools Day 2020, all hat blocks were replaced with 'Cat Blocks', where a cat drawing was put on top of them. Rolling the mouse over near the eyes of the cat block would cause its eyes to blink, and mousing over its ear would cause the ear to move.

There were many requests to bring them back,[2][3] but it was officially rejected by the Scratch Team.[4] However, they can still be accessed here.

Retrieved from "https://en.scratch-wiki.info/w/index.php?title=Hat_Block&oldid=298514"
Cookies help us deliver our services. By using our services, you agree to our use of cookies.
Categories:
Hidden category:
The Wiki is working on a dark theme, and you're seeing it! Got feedback? Post on the Wiki Forum Topic.