Hardware That Can Connect to Scratch

(Redirected from Hardware that can Connect to Scratch)

Scratch can connect to some real world hardware. Some of the features are natively built in, while some are added through an extension or modification.

Below is a list of hardware that Scratch can connect to:

The LEGO Education WeDo Robotics Kit is a simple robotics tool designed for ages 7–11. It allows users to design their own robots, and then program the robots using drag-and-drop software like Scratch. In Scratch, the Motor Blocks can control the robot's motor, turning it on or off, changing the power or direction. Scratch Link is Required [1] 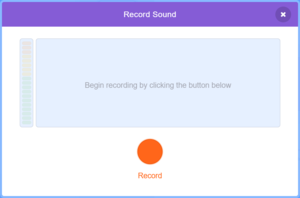 In Scratch 2.0, a new feature was added that allows Scratchers to use Microsoft Kinect-like features in Scratch. The video feed can be shown on the stage (with transparency), and the motion of the video can be obtained as well.

LEGO Mindstorms NXT is a programmable robotics kit released by LEGO in late July 2006, as a successor to the now obsolete RCX kit. The main component in the kit is a brick-shaped computer called the NXT Intelligent Brick. The Scratch modification Enchanting can be used to program LEGO NXT robots.

Micro:bit is a small computer which is able to be programmed. It was created in 2015 after being designed by the BBC. It has its own block language similar to Scratch but is also compatible with Scratch. Scratch Link is Required.[2]

The Lego Boost is another piece of hardware you can use with Scratch. It has motors, and light and tilt sensors. Scratch Link is required.[4]

Scratch can use hardware connection features of the Raspberry PI computer. The version of Scratch for the raspberry PI has some exclusive features that allow you to use its hardware.

The Sense HAT allows you to use the Sense HAT extension. You can measure temperature, air pressure, pitch, roll, and yaw. It also has a joystick. You can display text, costumes, and manually set pixels on its display.

The GPIO allows you to measure if electricity is applied to a pin and also apply electricity to pins.

Hardware that can no longer connect to Scratch

Below is a list of hardware that used to be able to connect to Scratch but is no longer able to. 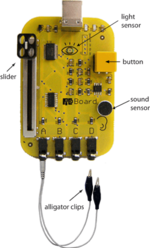 A diagram of a PicoBoard.

A PicoBoard is a piece of electronic equipment that allowed Scratch projects to interact with the outside world. It could sense light and sound, along with having a button and slider, and alligator clips. It was used with the () Sensor Value and Sensor ()? blocks. The PicoBoard is not supported by Scratch 3.0.[5]

With the JoyTail extension, Scratch can use remote sensor connections to connect to a joystick.

With the Catenary extension, an Arduino board can be controlled through Scratch. This project was being made by Chalkmarrow, but never seems to have been completed.[citation needed]

Finch is a small simple robot for computer science education designed by Carnegie Mellon's CREATE lab. It is powered via a USB cable. It can be easily connected to Scratch via a helper application, the "BirdBrain Robot Server".[citation needed]

Hummingbird is a robot created for education in 2010 by BirdBrain Technologies. It is powered via a USB cable. Like the Finch, it is easily connected to Scratch via BirdBrain Robot Server.[citation needed]

Retrieved from "https://en.scratch-wiki.info/w/index.php?title=Hardware_That_Can_Connect_to_Scratch&oldid=308880"
Cookies help us deliver our services. By using our services, you agree to our use of cookies.
Categories:
The Wiki is working on a dark theme, and you're seeing it! Got feedback? Post on the Wiki Forum Topic.