The Green Flag is clicked in this location.

The Green Flag is a programming feature that, when clicked, will start all scripts in that project that are hatted with the When Green Flag Clicked block. More simply, this block starts the project. When ⇧ Shift clicking the green flag, Turbo Mode will be activated.

In Scratch 2.0, Ctrl clicking would mute the project so that the project could not produce any sound (⌘ click on a Mac). In the Scratch 1.4 offline editor, pressing the ↵ Enter key on a keyboard would also start all green flag scripts, when not prompted for input by the Ask () and wait block.

when gf clicked
The When Green Flag Clicked block has the green flag icon on it.

Without the flag, no Scratch projects would be able to run unless a key was pressed, a sprite was clicked, or a When () is Greater Than () hat block was triggered to activate the scripts. While creating a project is fully possible without the flag, it is not recommended and most users use the green flag.[citation needed]

In older versions of Scratch 2.0, the Green Flag icon could be placed into custom blocks and variables by adding the text "@greenFlag" to the custom block name. 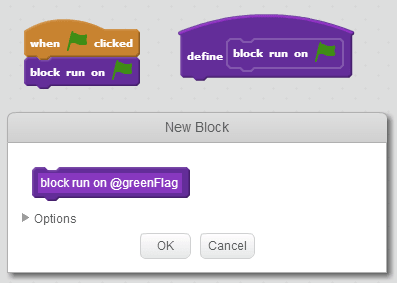 A similar trick could be done with the stop sign by adding the text "@stop" to a custom block.

Some users will request clicking the green flag a certain amount of times before playing. This improves the sync of the When Green Flag Clicked Blocks so that assets of the project will line up correctly.

Retrieved from "https://en.scratch-wiki.info/w/index.php?title=Green_Flag&oldid=281416"
Cookies help us deliver our services. By using our services, you agree to our use of cookies.
Categories:
Hidden category: