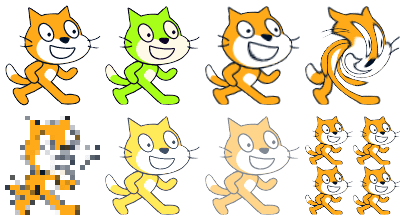 One costume can take on 200 different color-schemes using the color effect. The "real" effect of the color is equal to the numeric/stored effect modulo 200. This means that change [color v] effect by (200) will do nothing since the rendered color will be the same. Though, sometimes, this would appear as different.

In Scratch 2.0, there is no limit for the fisheye effect. At a certain point, increasing the effect will have no further effect on the rendered image. In Scratch 1.4, it cannot be greater than or equal to 1,073,741,723 or 230-101. If it is less than or equal to -100, it will take up part or all of its bounding box and have transparent and colored streaks emanating from the center, as shown in the picture on the left.

One costume can take on 100 different transparencies using the ghost effect. Once the absolute value of the ghost effect is greater than or equal to 100, the sprite is completely transparent and cannot be seen, but it still can be detected in some ways. This is useful for hiding sprites that still need to be detected, like a invisible platform in a platformer.

There was also a water ripple effect, which crashed Scratch due to a bug.[1]

Especially the ghost and brightness effects may confuse users as the results are dependent on the usage of other effects blocks in the project.[2]

In the early July 2013, Adobe updated Flash to version 11.8, removing hardware acceleration for Pixel Bender, which was used by Scratch to render graphic effects smoothly.[3] After this update, it was noticed by many Scratchers that the lag increased greatly when running graphic effect scripts.[4] Not only was Scratch affected by the lack of hardware acceleration, but almost all Flash applications using Pixel Bender also experienced the same issues and complications.[5]

This lag could be greatly reduced or diminished by downgrading to Adobe Flash version 11.7 and prior. The previous versions support hardware acceleration for Pixel Bender, which allows the graphical effects on Scratch and other Flash applications to run smoothly. The Scratch Team tried to develop a workaround to optimize smooth graphic effects without Pixel Bender, coming up with two possible solutions, both of which were unspecified.[6]

On August 30, 2013, an alternate, beta player, called Stage3D and still running in Flash, was released for testing.[7] It allowed one to enter the URL of a Scratch project and play it in the new player that was aimed toward reducing graphic effect lag. The current version of the player uses the faster Stage3D rendering engine by default when graphic effects other than ghost and brightness are used.

Retrieved from "https://en.scratch-wiki.info/w/index.php?title=Graphic_Effect&oldid=304799"
Cookies help us deliver our services. By using our services, you agree to our use of cookies.
Categories:
Hidden category:
The Wiki is working on a dark theme, and you're seeing it! Got feedback? Post on the Wiki Forum Topic.