A Forum Trend is a trend that is created and spread through a forum topic/post or signature. They often spread fast due to the small community of forumers. Often, trends are meme-related, or are popular all over the internet, like rickrolling.

Cheddargirl's signature before being "eaten" by an evil kumquat 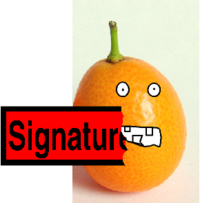 Joke studios[3] and accounts[4] have been created relating to evil kumquats. A kumquat is actually a small orange fruit, related to the orange.

Some users make scripts about kumquats in their signatures using the [scratchblocks] BBCode tag,[5] such as:

Another variation of the trend is when a single block is used to represent a supposed guard. A comment beside it often describes the name.

A single block with a name and description

In the Suggestions forum, there was once a trend where people would use a specific word for "support" instead of using the word "support" itself.[citation needed] Then they'll put the "translation" in their signature, many by saying "[random word] = Support".[citation needed] The words that people used were completely random, and if they supported a suggestion, they would post that word instead of the generic support. The trend is now rarely used after a Scratch Team member told people that it was confusing and advised people not to use it.[6]

In September 2013, a small and non harmful bug on the Scratch website resulted in a small semicolon that appeared at the bottom-left corner of every page. It became popularized very quickly, and after its removal people began placing the semicolon into their signatures in remembrance.[citation needed] After a year, the semicolon is still present in some signatures of active users on the forums, even some Scratch Team members.

If you see this signature while scrolling

Example of this trend

This trend involves a signature containing the following content:

There have also been variations of this trend, such as where the "only if" phrase is removed, or no image at all.[citation needed] Some also replaced X with their own username.[citation needed]

This was started by the user Zro716 and has spread slowly.[citation needed] The consequences of this trend is that the profile comments may be filled with comments saying "Thanks X!" or depending on what the signature requests users to do, which can be annoying and considered chainmail, or chain letter spam, which is why it's recommended to only use this trend temporarily.[citation needed]

When two or more users make very similar posts in a short amount of time (usually in the Questions about Scratch forum), they might edit their post and say "Ninja'd by (username)

)", "ninjaed", or something similar to that message. Ninja's happen when a user starts typing a post, but when they submit the post, another user has already written something similar. This is common on the internet and many other forums do this as well.[7]

Some users add a blank line and then type their name (or some form of nickname) after the main post content to "sign" their posts.[8] It was started by the user Sigton.[9] This trend isn't very popular, but a lot of the people who did it continue to do it to this day.[10]

Sometimes, a user will ask for "Internets" in their signature. Internets come from the site Internetometer. A user might put in their signature "Like this post? Give me internets!" and it would contain a link to a page for others to give the user an "Internet".[11]

Rickrolling is a prank and an internet meme involving using a type of bait and switch with a disguised hyperlink (sometimes called clickbait) to the Rick Astley song "Never Gonna Give You Up".[12] During April Fool's Day 2017, this trend was very popular around the Scratch Forums.

In October of 2017, on Things I'm Reading and Playing (forum), topics asking for facts about the said medium had been appearing. It first started with the "Random Facts about Random Video Games" topic created by I-Iz-Litten on September 9, 2017. In October of 2017, they created two more topics relating to random facts about media. [13] [14] This trend had grown in a few days from only 3 topics to 25 topics that follow this trend.[15]

After a few days, most of the topics were deleted and the rest were closed since they didn't fit with the forum very well.[16][17]

After the topics were closed, a "remembrance" group was founded and all people involved in the short-lived trend were invited.[18]

In various signatures, a user will include a string of letters and ask them to search that string.[citation needed] If you search that in Google, or another search engine, it would come up with the user's posts as the keyword is in their signature, therefore showing every instance of that signature.[citation needed]

With every forum topic, each new page is created after 20 posts have been made on the previous page, making the first post on the new page the 21st post. This trend involves posting "Page ___ no edit!" as the first post of each new page, with the page number in the blank and without editing the post.[19] Also, some users later edit their posts to say “page ___ edit”. This trend has been first seen in the Requests forum in a shop called Team Intelligent Projects Shop (commonly known as TIPS)[citation needed] and still mainly resides in the requests forum.[citation needed]

Some topics/users now consider “page ___ no edit” spam,[20] as this trend has led to spam and may distract certain users.

A group of Scratchers, including many forum helpers and started by Mr_PenguinAlex, made a 'cult' studio called "the butterfly cult"[21] in June 2020. Around 22 projects including the Butterfly 2 sprite were added to the studio.[22] In the comments section of the studio, Scratchers discussed the sprite in serious voice as if it were a deity (giving meaning to the phrase "butterfly cult") and wrote "glory to butterfly" often.[23]

Some users changed their profile pictures to include Bitmap versions of the Butterfly 2 sprite's costumes. Users made many joke accounts[24][25][26] for the group. The original studio[27] has been deleted,[28] but its replacement can be found here.

The Sixty-Second Rule (which is also referred to as the Sixty-Second Demon) refers to when users try to post too quickly (60 or 120 second rule). When users try to post too quickly, a message will pop up: 'Sorry, you have to wait <60 or 120> seconds between posts.'. When this happens, users will usually write at the bottom of their first post something like 'SIXTY SECOND DEMON AAARGH!' or 'POST DEMON! NUUU!'.[29] This trend was started by Requests forumer Congyingzhou.[30]

In 2014, a user by the name of Moisture set their signature to "Be Moist

". 6 years later in June 2020, a Scratcher by the name of Super_Scratch_Bros20 found a post by Moisture, and they then brought it up in a studio where many forum helpers gathered. One of the forum helpers, Za-Chary, mentioned the idea of turning it into a trend, which sparked a lot of helpers to put "Be Moist

" in their signatures as well.[31] Not long after, a studio called the Monarchy of Moist was created (the old studio was deleted by the owner for being "old" and "dead", but it was revived by another user), which spread the trend onto the main website as well. As of early July 2020, some users have also changed their profile pictures to include sunglasses, referencing the

emoji used in the phrase "Be moist

In July 2020, a trend began when user --Explosion-- put Last edited by kaj (Tomorrow 00:00:00) in their signature.[32] Soon after that, a tutorial was made on how to make one. However, it was deleted by a moderator,[citation needed] causing the popularity of the trend to skyrocket. It was used to scare or trick people into believing Kaj was hacking or back from their ban. This trend is rarely parodied or customized, but this is occasionally done. [33]

Another example of a Meme Man signature, with a doctor.

In July 2020, the forum user Jeffalo changed their signature to a banner that contained a character wearing a hood, with a computer and text reading "hekcer" (an intentional misspelling of "hacker") over a background full of text-based code.[citation needed] The character's face was actually the face of the internet meme "Meme Man". Some forum users started to add the banner to their own forum signatures.

After that, another version of the banner appeared showing "meme man" wearing a hat and watering flowers with the caption "Garnder" ("Gardener").[citation needed] This inspired many other users to make their own "meme man" signatures with misspelled names of various jobs, like "pehlet" ("pilot") or "ofecer" ("officer").[citation needed]

Some users even started to use misspelled words in comments, and an account named "hekcer" was created, spreading the "meme man" trend onto the main site.

In early August 2020, this trend became popular on many platforms. This is similar to Rickrolling that involves a dance from a game called Fleeing The Complex, which is from the Henry Stickmin series. Many Scratchers have remade the dance, like this example, in Scratch projects to trick people into clicking it. Some even changed their profile picture and signatures to spread the trend.[citation needed] 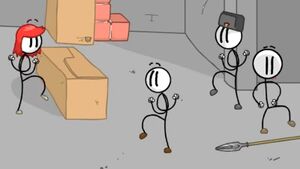 Distraction Dance from Fleeing The Complex

In early 2021, the Scratch user Ihatr changed their signature to multiple images stringed together[35] to look like one after seeing an old post by the user Austinato. After users took notice, many proceeded to make their own after being inspired by previous users.

An example of an image signature, taken from Ihatr's signature.

Ihatr also briefly made image signatures in his shop[36], boosting the popularity of it. As of March 2021, this trend is small[citation needed], but many still follow it.[citation needed]

King/Queen of the Page

An example of King of the Page

Retrieved from "https://en.scratch-wiki.info/w/index.php?title=Forum_Trends&oldid=316696"
Categories:
The Wiki is working on a dark theme, and you're seeing it! Got feedback? Post on the Wiki Forum Topic.